That time when Aaron Finch went berserk against the Zimbabweans.

Zimbabwe might have a hint of regret at some point for electing to bowl first against Australia in the 3rd game of the T20I Tri-Series only to wait till the final over of the innings to break the opening stand. Aaron Finch and D’Arcy short never looked like getting out as Zimbabwe conceded their biggest T20I total. While Finch was hitting every second ball he faced for a boundary, D’Arcy failed to get his timing right throughout the innings.

The hosts might be happy given the fact that runs came at a quick pace only from one end as things could have gotten worse if Short had also taken their bowlers to cleaners. Irrespectively of all these, Finch cruised to 172 to break his own record of the highest T20I individual score. In this process, he shared a 223-run partnership with D’Arcy. This is the first ever double century partnership in the history of T20I cricket across Men’s cricket and Women’s cricket. 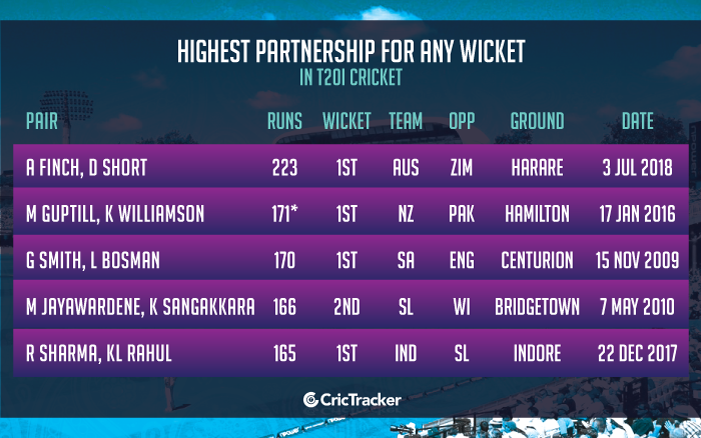 The previous highest across both the gender T20I formats was 182 by New Zealand’s opening pair of Suzie Bates and Sophie Devine against South Africa Women during last month’s T20I Tri-Series. The highest partnership for any wicket in Men’s cricket was also recorded by a New Zealand opening pair of Martin Guptill and Kane Williamson who shared an unbeaten 171 while chasing Pakistan’s total in the 2016 Hamilton T20I. 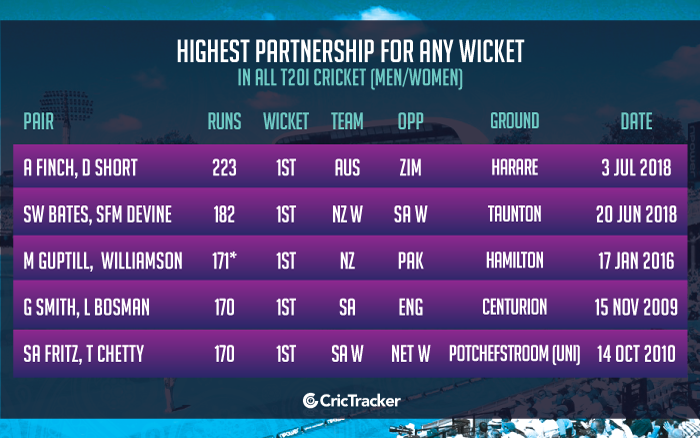 The Australian pair batted 116 balls which is the longest stand in T20I cricket and the 2nd longest in the T20I format across Men’s and Women’s cricket. South Africa’s Women opening pair Lizelle Lee and Dane van Niekerk batted 120 overs against Pakistan in the WT20 2014 game sharing an unbeaten 163-run stand. The 223-run partnership between Finch and D’Arcy is also the all-time highest opening partnership in the Twenty20 history.

The Australian pair broke the record held by Kamran Akmal and Salman Butt with an unbeaten 209 partnership in the last year’s Domestic T20 Cup game. The partnership of 223 by Finch and D’Arcy is the 2nd biggest for any wicket in the T20 cricket. The RCB pair of Virat Kohli and AB de Villiers shared 228 runs for the 2nd wicket in the 2016 IPL against Gujarat Lions bettering their unbeaten 215-run stand against Mumbai Indians in 2015. 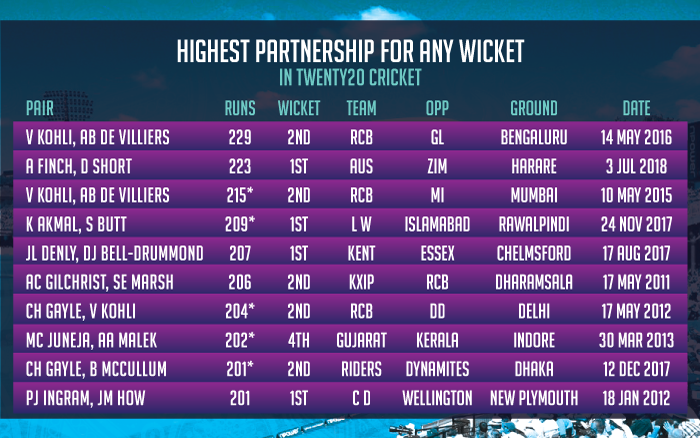