India have chased in excess of 200 four times.

India had an outing to remember in their opening T20I against New Zealand at the Eden Park in Auckland. The Men in Blue won by six wickets to take a crucial 1-0 lead in the five-match series. The visitors had to work out of their skins though to secure victory. The Black Caps put up a mammoth score of 203 on the board after fifties from Colin Munro, Kane Williamson and Ross Taylor.

After Munro and Guptill took the India bowling by the scruff of its neck in the powerplay, Virat Kohli’s men came back. But captain Kane and the experienced Taylor guided the Kiwis over the 200-run mark. In their run-chase, Rohit Sharma perished early to Mitchell Santner. However, KL Rahul and Kohli injected momentum back into the innings with an important 99-run stand off 50 balls.

To India’s dismay, both perished in quick succession. From there on Shreyas Iyer took the onus upon himself and shepherded India through to glory. He stayed unbeaten on 58 off 29. It was also the fourth time the Men in Blue chased down a target in excess of 200 in T20Is. Australia have done it twice while South Africa, New Zealand, West Indies, England, Bangladesh and Qatar did it once.

India have now recorded the 10th most successful run-chase in T20Is. Australia are the toppers after they chased down 244 against the Black Caps at the Eden Park back on February 2018. It’s not a surprise that Auckland features in the list twice courtesy of the short boundaries and decent pitches. India feature thrice in the list. Back in 2009, India chased down 207 versus Sri Lanka in Mohali.

Recently, at the fag end of 2019, India tracked down 208 against Kieron Pollard’s West Indies in Hyderabad. West Indies are deemed to possess some of the biggest hitters and they are second on the list. In 2015, the Caribbean team chased 232 at the New Wanderers Stadium in Johannesburg.

Back in the 2007 T20 World Cup, South Africa pulled off a superlative run-chase against the West Indies in Johannesburg itself. Bangladesh accomplished the milestone once versus Sri Lanka in the 2018 Nidahas Trophy. Qatar and England feature in the list as well. 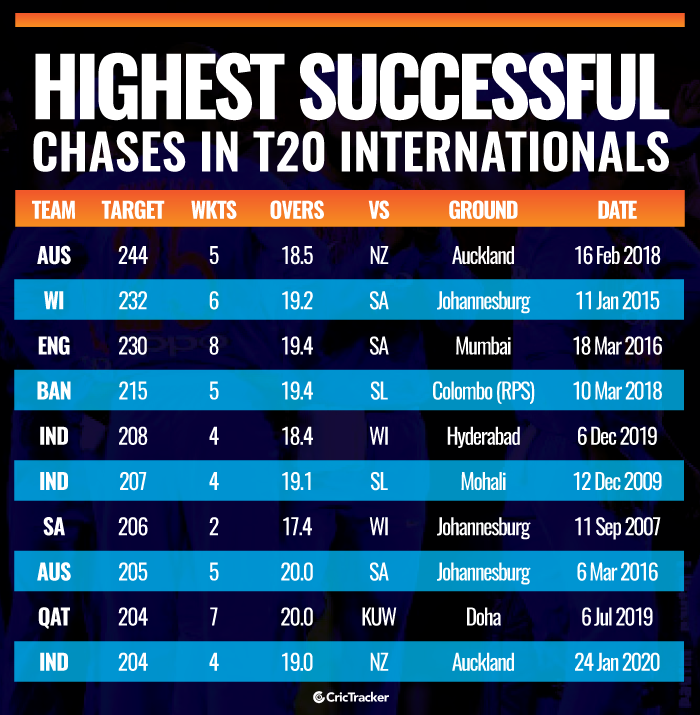