India, who were expected to roll over Hong Kong with a hefty batting performance and some dominating bowling effort nearly went down against the Associate nation. In their first game of the Asia 2018, India finished with only 285/7 from a strong position as they were 240/2 in the 41st over. The inability of picking wickets early on in the innings kept the Indians tense as Hong Kong’s opening pair added 174 in 34.1 overs. However, the new batsmen couldn’t keep the tempo up and they ended up 26 short of the Indian total.

In this process, Anshuman Rath and Nizakat Khan became the first Hong Kong pair to put on a century opening stand in ODI cricket and also broke their own record for the highest ODI partnership. The pair of Anshuman and Nizakat added 170 for the 4th wicket against Scotland in 2016 which was the highest ODI partnership for Hong Kong until they faced India. Skipper Anshuman made 73 while Nizakat top-scored with a 92.

Highest partnerships for associate teams against India in ODI cricket: 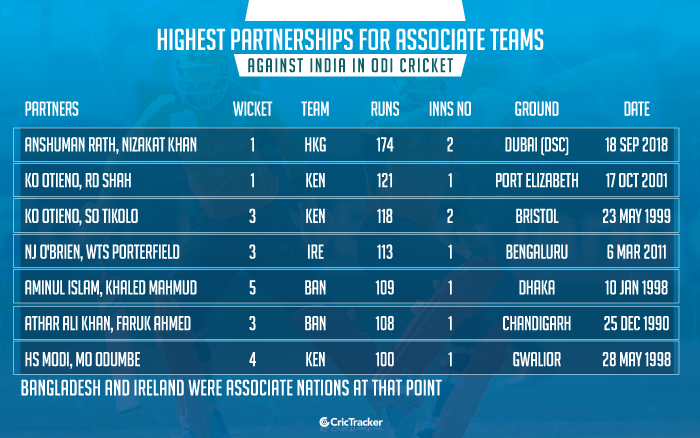 This partnership is the highest by an associate nation pair against India in the ODI format bettering the previous record by 53 runs. The Kenya pair of Kennedy Otieno and Ravindu Shah added 121 runs for the opening wicket against the Indians in the Port Elizabeth ODI in 2001. The Hong Kong pair’s partnership is also the highest for any associate nation pair in an ODI game while playing against a full-member nation. 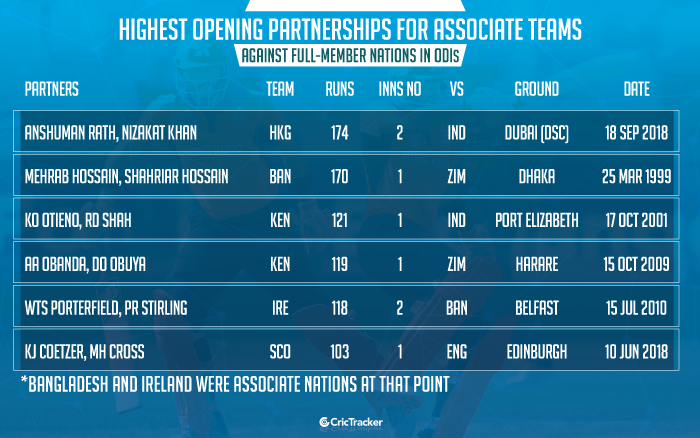 Back in 1999, before gaining full-member status, Bangladesh’s opening pair of Mehrab Hossain and Shahriar Hossain put on 170 runs in the 1999 ODI in Dhaka against Zimbabwe. It was also the then highest partnership by an associate nation pair against full-member nation but now it has been pushed to 4th spot. During the World Cup Qualifiers this year, Scotland’s Berrington and MacLeod put on 208 against Afghanistan for the 3rd wicket while Canada’s Barnett and Billcliff put on 177 for the 2nd wicket against Bangladesh in 2007. 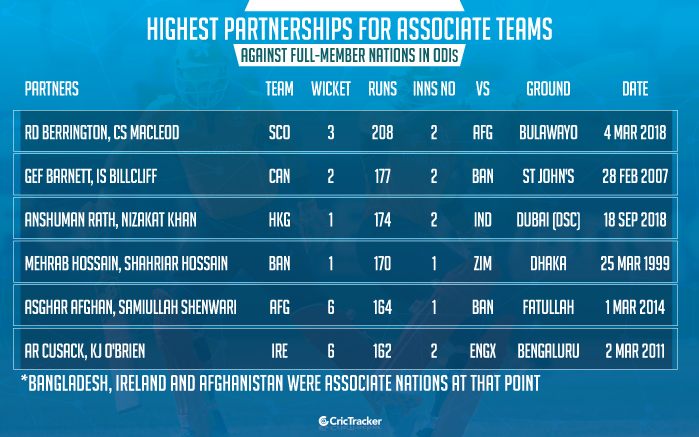