All the major statistical highlights from the low-scoring thriller won by India Under-19s in Colombo.

India Under-19s clinched the Youth Asia Cup for the 7th time in eight editions as they sneaked through a 5-run win against the Bangladesh Under-19s in the final. After electing to bat first, India lost three wickets for just 8 runs on the board. Skipper Dhruv Jurel (33), Karan Lal (37) and Shashwat Rawat (19) tried to bail the team out of troubles. The three ended up as the only players to get into double digits for India who were bundled out for only 106.

Left-arm pacer Akash Singh took three wickets in his first three overs to leave the chasing side four down for 16 runs. The left-arm spinner Atharva Ankolekar took wickets at regular intervals to restrict Bangladesh later on. Skipper Akbar Ali (23) and Mrittunjoy Chowdhury (21) threatened to take the game away from the defending champions. However, Ankolekar’s 5-wicket including the double strike when Bangladesh were six runs away from win sealed the match for India.

All the major statistical highlights from the low-scoring thriller won by India Under-19s in Colombo:

1 – This game between India and Bangladesh is the first tournament final in Youth ODI cricket where the captains of both teams were keepers – Dhruv Jurel and Akbar Ali.

In senior Men’s International cricket, there were six ODI finals where captains of both the teams were keepers. MS Dhoni and Kumar Sangakkara were the keeper-captains involved in all those six. There is one such instance in Women’s cricket as the wicket-keepers Jodie Fields and Merissa Aguilleira led Australia and West Indies respectively in the 2013 World Cup final.

9 – The nine runs aggregated by Bangladesh are the 2nd fewest in a Youth ODI final. Top five of India Under-19s aggregated only five runs during the 2006 U19 CWC final against Pakistan also host by RPS, Colombo.

No other team’s top five aggregated below 30 runs in a tournament final in Youth ODI cricket. In fact, Bangladesh innings is only the 8th in Youth ODIs where top five collectively scored less than ten runs.

12 – The top three batsmen both the teams aggregated 12 runs – 6 each by India and Bangladesh. These 12 runs are the fewest by top three in a Youth ODI surpassing the 13 runs during the 2004 U19 CWC match between Australia and Sri Lanka.

106 – The total of 106 defended by India is the lowest total defended successfully by any team in Youth ODI cricket. Nepal defended 107 against Kenya during the 2000 U19 CWC match which was initially reduced to 46 overs. 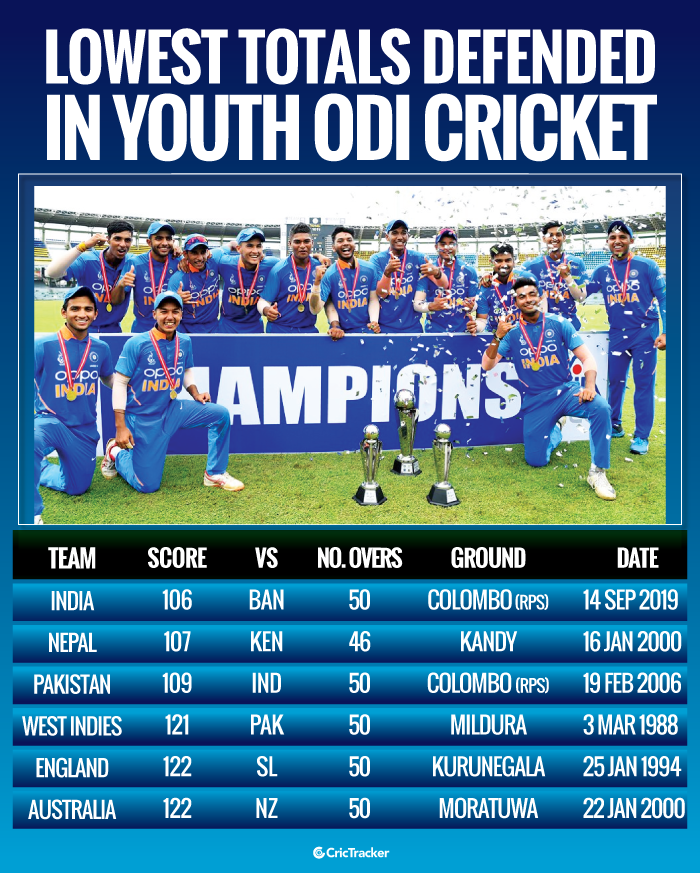