Cheteshwar Pujara is the latest to join the list with his ton against Karnataka in the ongoing Ranji Trophy.

Cheteshwar Pujara’s career highlight came when he starred for India in their maiden Test series win on Australian soil in 2018/19 with three hundreds. However, since then, the Indian Test No.3 has been short of big knocks. The same was replicated for him in the domestic matches as he failed to score a century in the first three rounds of Ranji Trophy 2019-20. Before the critics raised fingers on his form, the 32-year-old scored an unbeaten century against Karnataka during the first day of the home fixture.

Saurashtra elected to bat first in the match which began on Saturday in Rajkot. Twin strikes from Jagadeesha Suchith left the home side 33/2 before Pujara joined hands with Sheldon Jackson. The Indian Test regular scored runs at a good pace throughout the day. He remained unbeaten on 162 from 238 balls with 18 boundaries as Saurashtra finished the first day at 298/2. This hundred was Pujara’s 50th in first-class cricket which makes him the 9th Indian to achieve this feat and the 5th quickest.

Vijay Hazare was the first Indian player to score 50 hundreds in first-class cricket. He got there in his 159th match playing 253 innings; the fastest among the nine players. Hazare was also the first player to score as many as 50 centuries in FC cricket on Indian soil. Wasim Jaffer became the 2nd during the previous domestic season as he now has 53 FC hundreds in India; three more than that of Hazare.

Sachin Tendulkar is the 2nd quickest Indian to 50 FC hundreds as the milestone century came in his 273rd innings. Mohammad Azharuddin (312) and Sunil Gavaskar (321) are the other players ahead of Pujara in this list. The Saurashtra batsman had a good chance to go past both as his 49th first-class century came in his 305th inning. Pujara scored an unbeaten 131 during the 4th innings of the 2018/19 semi-final also while playing against Karnataka.

In the next 17 FC innings, Cheteshwar scored five fifties but failed to convert any of them into three figures. He spent nearly 350 days between these two centuries against Karnataka. This is the 2nd longest time period for Pujara without a century in first-class cricket. He went for more than two years without an FC hundred between June 2010 and August 2012. 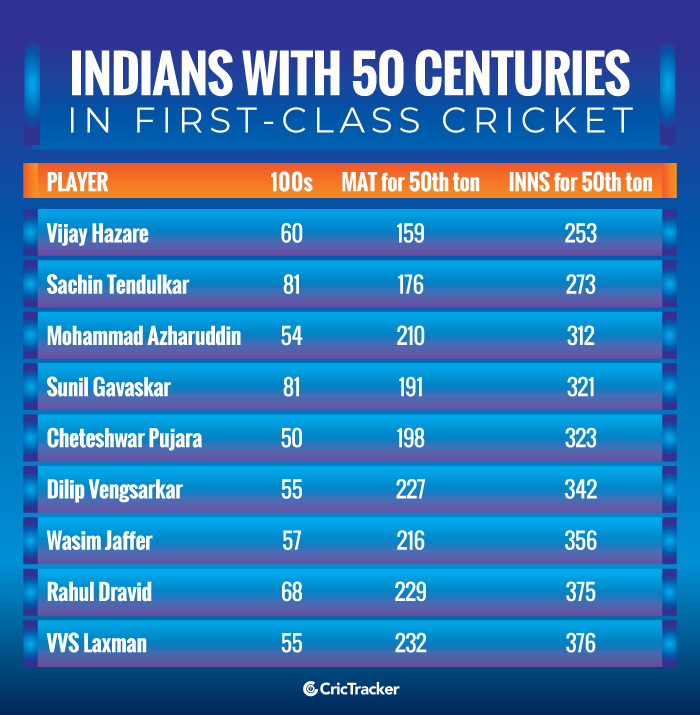