Stats: Joe Denly records a century and a hat-trick in the same T20 game

Stats: Joe Denly records a century and a hat-trick in the same T20 game

His hat-trick helped Kent win the match by 6 wickets in the T20 Blast.

Joe Denly produced one of the greatest all-round performances on Friday in the T20 Blast game to hand his team a victory out of nowhere against Surrey at The Oval. The hosts were cruising to a comfortable win chasing 174 as they were placed at 135/3 in the 13th over. On the 4th ball of his final over, Denly got Rikki Clarke stumped and trapped Jamie Smith on the very next ball. He completed a hat-trick with the last three balls of his bowling quota as the new batsman Mathew Pillans edged one down the leg to the keeper.

The hat-trick brought down the equation to 39 from the last seven overs with four wickets in hand. Carlos Brathwaite and Adam Milne then shared the remaining four wickets to bundled out the hosts to 167 as Kent sneaked in a 6-run win. Early with the bat, Denly scored his 4th century in the Twenty20 format opening the innings for his team. The right-hander scored a 63-ball 102 with 12 fours and two sixes before getting dismissed on the penultimate delivery of their innings.

Thus, Joe became the first player in the Twenty20 history to score a century and take a hat-trick in the same game. Yuvraj Singh in 2009 IPL game, Jannisar Khan in 2010 Pakistan Domestic T20 and David Willey in the 2013 England T20 Cup Final have scored a fifty and captured a hat-trick in a Twenty20 game before Denly. Interestingly, no player has scored a ton and completed a hat-trick in a List A game but 16 players have achieved it in first-class cricket.

Here is the list of players who’ve scored a century and picked three wickets in the same T20 game: 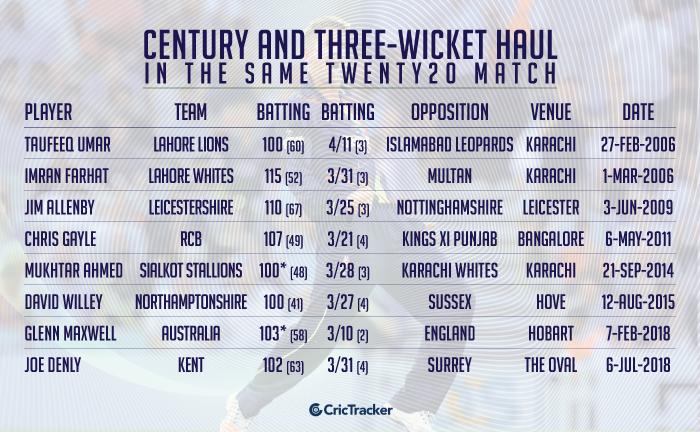