Joe Root’s record in Test cricket has been on a decline as the England No.1 batsman is averaging well below 40 in the longer format over the last couple of years. The drop in his averages coincides with him taking up the captaincy responsibility. In 33 Tests as skipper, Root averages only 41.15. His conversion rate has also been under scanner as he managed to convert five of his 23 fifty-plus scores into centuries during this period.

His numbers since the start of 2018 home series will surely worry the team management keeping the Test championship in mind. The England skipper scored 1179 runs from 19 Tests at an average of 33.68 with three tons and six half-centuries. Two of his hundreds came in the dead rubber games. In the ongoing Ashes series, Root bagged three ducks including two golden ducks. In this process, he became the first England skipper with three ducks in a Test series.

However, even in this tough time, Root managed to squeeze a record to his name. On the opening day of the Oval Test match, the 28-year-old completed 7000 runs in Test cricket. Root needed 6 years and 273 days from his debut to reach this milestone; the shortest time taken by any player. He thus broke the record held by Sir Alastair Cook who required 6 years and 280 days for 7k Test runs; a week more than what Root needed.

The top four fastest players in terms of time taken are from England who have played in this century. A total of 48 players have got to 7000 Test runs but none of these four players features in the top 1/3rd players who are fastest in terms of innings. One of the reasons for their domination in this list has been the number of Test matches played by England every year. The English team plays 13 Tests per year on an average in the last 15 calendar years. Even in 2019, they have already featured in 9 Test matches.

Among the top ten fastest players to 7000 Test runs, the quickest in terms of time taken is Rahul Dravid. In fact, Dravid was the quickest in terms of time elapsed to this milestone. He got there in 8 years and 138 days during the 2004 Mumbai Test match against Australia. Overall, Joe Root is the 12th player from England with 7000 Test runs and the 4th quickest among those 12 players. He is also the 3rd youngest to this milestone after Sachin Tendulkar and Sir Alastair Cook.

Fastest to 7000 runs in Test cricket by the time taken: 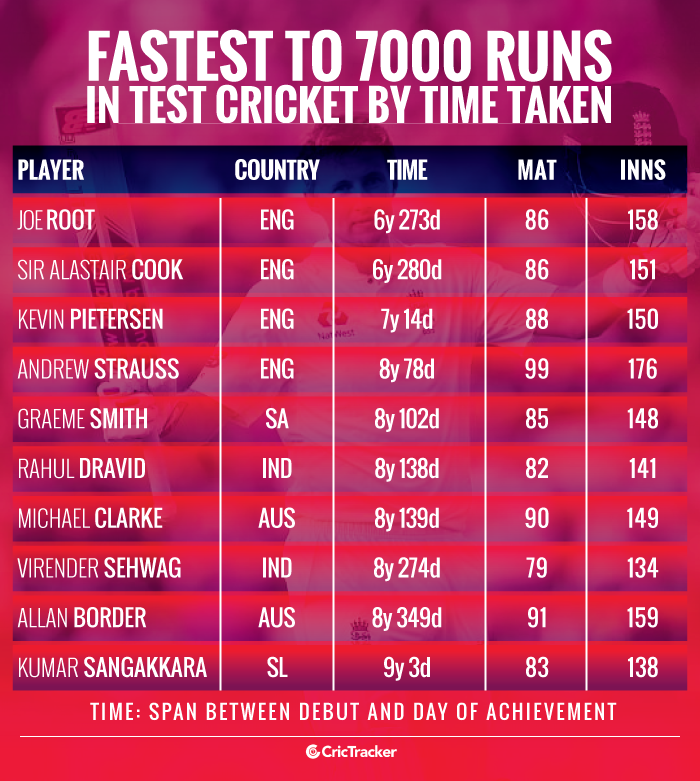