Jos Buttler’s scoring abilities don’t seem to be taking a hit as the England keeper-batsman is batting at his best ever since he was promoted as an opener in the IPL. The Rajasthan Royals’ overseas star struck a record five consecutive fifties in the T20 league before joining the national side. He performed well in the 2-match Test series against Pakistan and was the man of the series in the ODI series against Australia with some clinical performances. Buttler’s rich form prompted the team management to open with him in the one-off T20I.

Opening the innings ahead of the likes of inform Jonny Bairstow and Alex Hales, Buttler struck a 30-ball 61 with six fours and five sixes to hand a fierce start to the hosts. This was the 2nd time that Buttler opened the innings in T20I cricket for England and scored fifties on both the occasions. He scored an unbeaten 73 off 49 balls against Sri Lanka while chasing in the 2016 Southampton T20I. Buttler scored 12 fifties in the 29 T20 innings where he was sent in as an opener.

The Aussie bowlers got hit all over the park by Jos Buttler once again as England’s keeper raced to a 22-ball fifty. This is the fastest fifty in the T20I format by any player beating Ravi Bopara’s 23-ball effort also against Australia in the 2014 Hobart T20I. Earlier in the ODI series, skipper Eoin Morgan broke England’s ODI record for the fastest fifty held by Jos Buttler. Morgan brought up his fifty in 21 balls in the Trent Bridge ODI while Buttler needed just 22 balls in the 2016 ODI against Pakistan at the same venue.

His record fifty at the start helped England post a huge total. His fellow opener Jason Roy scored a 26-ball 44 while Alex Hales struck a 24-ball 49 as the hosts finished with 221/5 on the board. This was the 2nd highest total in Men’s T20I cricket for England behind their 230/8 while chasing against South Africa in the 2016 WT20 game in Mumbai.

Here are the fastest fifties in T20I cricket by English batsmen: 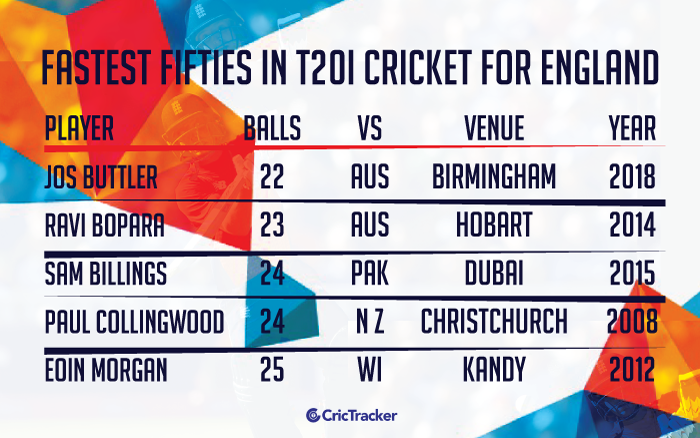