They could only score 84 runs for the loss of eight wickets after batting for 20 overs.

The ongoing Indian Premier League (IPL) witnessed Kolkata Knight Riders (KKR) and Royal Challengers Bangalore (RCB) locking horns in match 39 of the season. But only the toss went in KKR’s favour on the day after they opted to bat first. It all went haywire for the Eoin Morgan-led side courtesy of some exceptional new ball bowling from RCB.

Mohammed Siraj took the new ball for them and literally wrecked havoc. Bowling two maidens upfront to become the first bowler to do so in the IPL, Siraj sent back Rahul Tripathi, Nitish Rana and Tom Banton. Shubman Gill also got out to Navdeep Saini in the meantime and within no time, KKR were reduced to 14/4 in the fourth over. There were hopes from the former and current KKR skippers, Dinesh Karthik and Eoin Morgan to resurrect the innings.

But Yuzvendra Chahal came into the attack and broke the 18-run stand pinning Karthik in front of the stumps. Runs came at a premium for KKR and even though Morgan tried his best mustering 30 runs, he could not up the ante. The only time he played an aggressive shot, the southpaw was holed out in the deep. It was only due to the 27-run stand between Lockie Ferguson and Kuldeep Yadav that KKR managed to reach 84 runs for the loss of 8 wickets in 20 overs.

With this score, they ended up bagging an unwanted record to their name of scoring least amount of runs after playing full 20 overs. KKR broke Kings XI Punjab’s (KXIP) long-standing record when they had posted only 92 runs against CSK back in 2009 in Durban.

The third lowest score in this list is recorded by Mumbai Indians (MI) when they had managed to muster only 94/8 in their 20 overs against Rajasthan Royals in 2011. Kings XI Punjab (KXIP) once again feature in this list, again while chasing a total, as they had scored only 95 runs against the CSK at the Chepauk in 2015.

RCB themselves have been the part of this embarrassing list at the fifth place as they scored only 96 runs despite playing 20 overs against the now defunct Rising Pune Supergiant in April 2017. 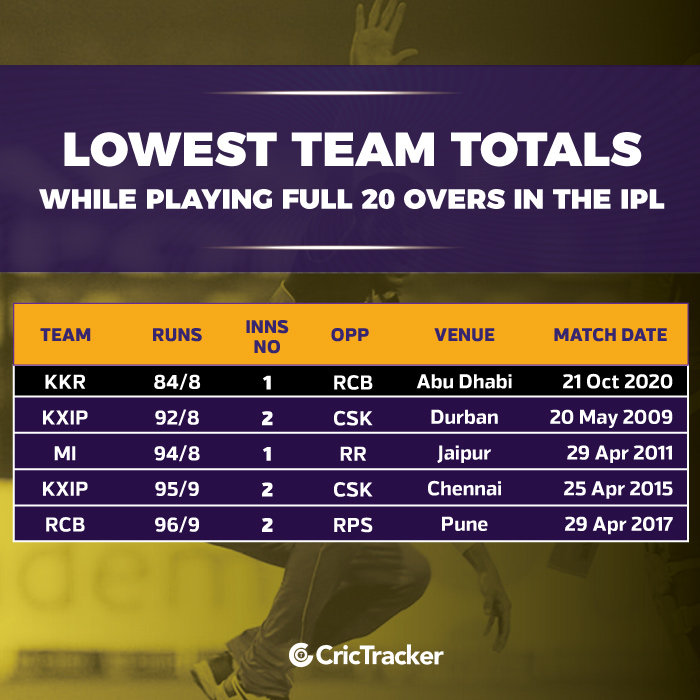