Stats: KXIP skipper KL Rahul registers the highest score by an Indian player in the IPL

Stats: KXIP skipper KL Rahul registers the highest score by an Indian player in the IPL

KL Rahul missed out after getting a start in Kings XI Punjab’s opening match against the Delhi Capitals at the Dubai International Stadium. However, at the same venue, against the Royal Challengers Bangalore, he made his start count. He shone to such an extent that he registered the highest score by an Indian batsman in the history of the cash-rich Indian Premier League (IPL).

He got a couple of lifelines during his knock after Virat Kohli, the RCB skipper, dropped him. Rahul made the opposition pay big time. The right-hander went on to muscle 132* runs off a mere 69 balls with the help of 14 fours and seven hits into the stands. Rahul was severe even on veteran fast bowler Dale Steyn, who leaked as many as 57 runs in his quota of four overs.

Rahul blended caution with aggression to start his knock, getting his half-century off 36 balls. It took him 26 more balls to accomplish his second IPL ton off 62 balls. His first century came against the Mumbai Indians (MI) in 2019 at the iconic Wankhede Stadium in Mumbai. In Dubai, once he got to his ton, he pressed the accelerator and smashed the leather all around the park.

He ended up scoring 64.07 per cent of the team runs as KXIP ended with a colossal 206 for three in their 20 overs. The other batters lent him adequate support. In fact, in his fourth-stand of 78 runs with Karun Nair, Rahul dominated the show even as his partner got a handy eight-ball 15. Rahul also took Umesh Yadav and young pacer Navdeep Saini to the cleaners as well.

As far as the Indian record is concerned, he got past Rishabh Pant, who notched 128* off 63 balls, while playing for Delhi Daredevils, now Capitals, against the Sunrisers Hyderabad (SRH) in 2018 at the Arun Jaitley Stadium in New Delhi. There was no way one could stop Rahul in Dubai.

Murali Vijay, Virender Sehwag and Paul Valthaty are the other five players in the top five of the elite list. It’s pertinent to note that Manish Pandey was the first Indian batsman to get a century when the tournament took place in South Africa. 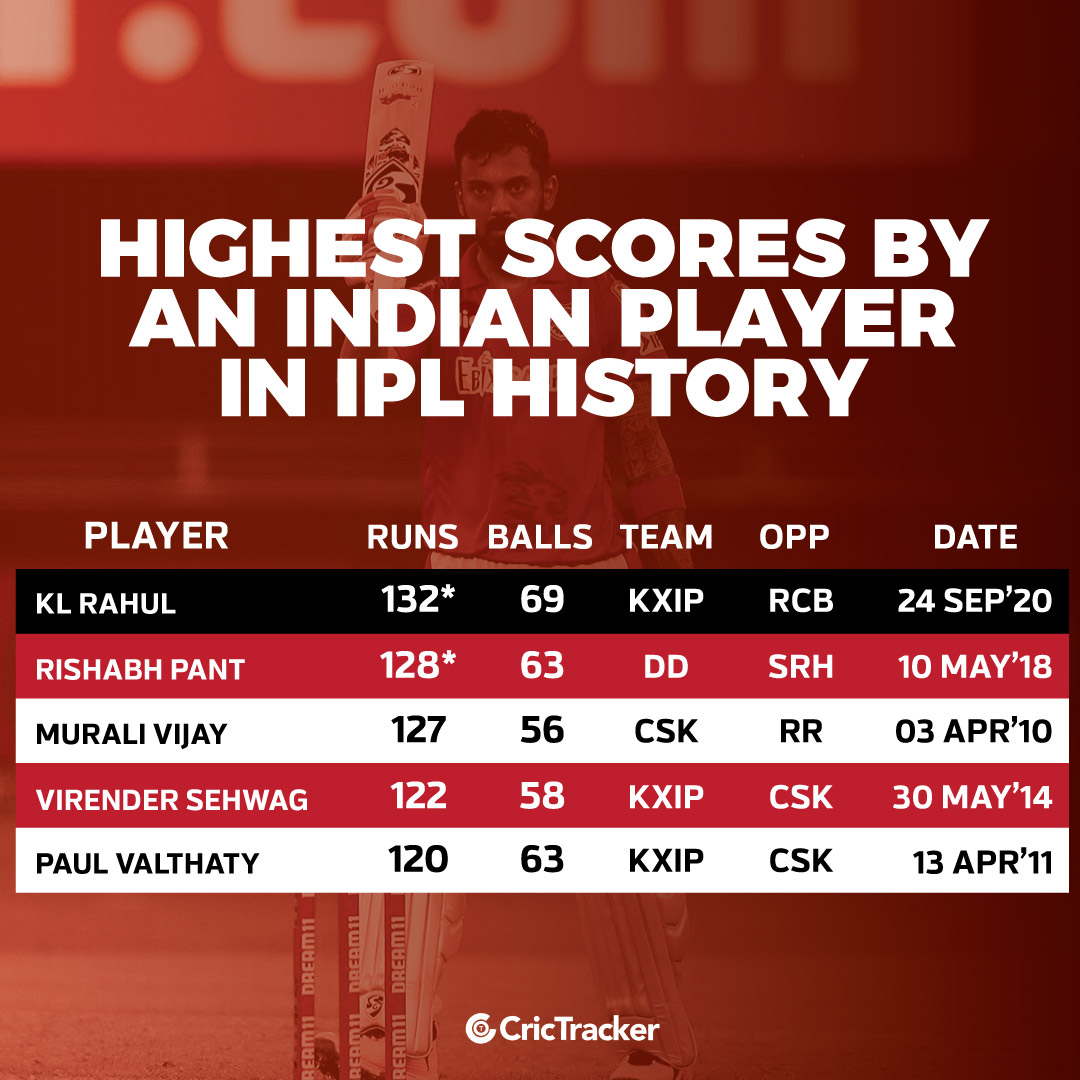