Kyle Abbott is the first player to take 17 wickets in a county match since 1939.

Kyle Abbott produced havoc with the ball for Hampshire in the County Championship match that ended on Wednesday in Southampton. The pacer bagged 17 wickets in a low-scoring game against Somerset. Abbott’s efforts powered Hampshire to a 136-run win and helped them move to 3rd place in the Division 1 table. Hampshire were restricted to just 196 despite Liam Dawson’s century in the first innings after electing to bat first. Somerset, in reply, were reduced to 65/8 with Abbott picking up seven wickets.

A 67-run partnership between Dominic Bess and Roelof van der Merwe boosted them to 142 and bring down the deficit to 54 runs. Abbott took the last two wickets and finished the innings with figures of 9/40. It was skipper James Vince who stepped up with the bat in the 2nd innings for the hosts. His lone effort of 142 pushed Hampshire to 226 and set a target of 281. Steven Davies (51) and Murali Vijay (29) put pressure back on Hampshire with an 86-run opening stand from 20 overs.

But once Abbott got the wicket of Vijay, the collapse never took a break. In the next ten overs, Somerset lost seven wickets for 14 runs with the South African taking six of those. Lewis Gregory tried his heart out, scoring an unbeaten 34 but Somerset were bundled out for 144, two runs more than what they got in the first innings. Abbott finished the innings with 8/46 and recorded match figures of 17/86.

His match figures are the 10th best bowling for any player in first-class cricket. These are also the best since Jim Laker’s 19/90 in the Test match against Australia in 1956. In these 63 years, Abbott is one of the two players to take as many as 17 wickets in a first-class match. Canada’s John Davidson took 17/137 against the USA in 2004. Abbott is also the first player to take as many as 17 wickets in an FC match for Hampshire and his bowling figures are the 4th best in a county match and the best in 94 years. 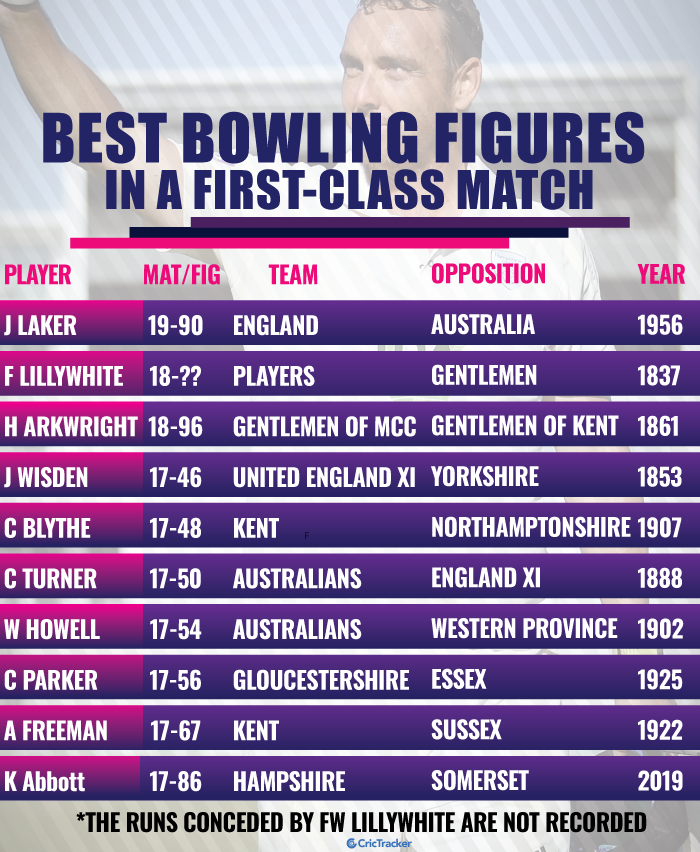