Madhya Pradesh lost six wickets at the score of 35 in the space of 23 deliveries.

With 24 points from seven matches, Madhya Pradesh needed at least three points from their last league game to confirm their spot in the Ranji Trophy quarter-final. But the Andhra team, that had only 11 points before the last round, threw a surprise at the MP team to knock them out of the tournament. Playing in Indore, Madhya Pradesh reduced the visiting side to 132 in the first innings after electing to bowl first. However, they also struggled with the bat as were bowled out for just 91 with pacer Girinath Reddy claiming a six-wicket haul.

Karan Shinde’s unbeaten 101 powered Andhra to 301 in the second essay and set a 343-run target. The hosts were sent into tatters losing the key wickets of Ajay Rohera, Rajat Patidar and Naman Ojha by 19 runs on the board. At the stroke of drinks break, MP lost their 4th wicket in form of Aryaman Vikram Birla at the score of 35. The hosts were not given a chance to any more to the total as the next four batsmen bagged ducks including three in an over bowled by KV Sasikanth. Yash Dubey, the top-scorer, depart for 16 as the 9th wicket at the score of 35.

With Gourav Yadav not turning up to bat, Madhya Pradesh’s innings came to an end at that moment. They lost their last six wickets in the space of 23 deliveries without adding a run. Sasikanth finished with 6/18 while P Vijay Kumar picked 3/17. This was MP’s lowest first-class total surpassing their 60/10 against Baroda in 2013/14 season.

This is the 2nd lowest total made by any team against Andhra behind 33/10 by Kerala way back in 1969/70. By not adding a run after losing their 4th wicket, Madhya Pradesh recorded 6th such instance in the first-class history. Among the matches where the fall of wickets is known, the first with 0 runs being added after the fall of the 4th wicket was by the Australian team in the 1896 Lord’s tour game against MCC.

0 runs added after losing the 4th wicket in an all-out innings in first-class: (where known) 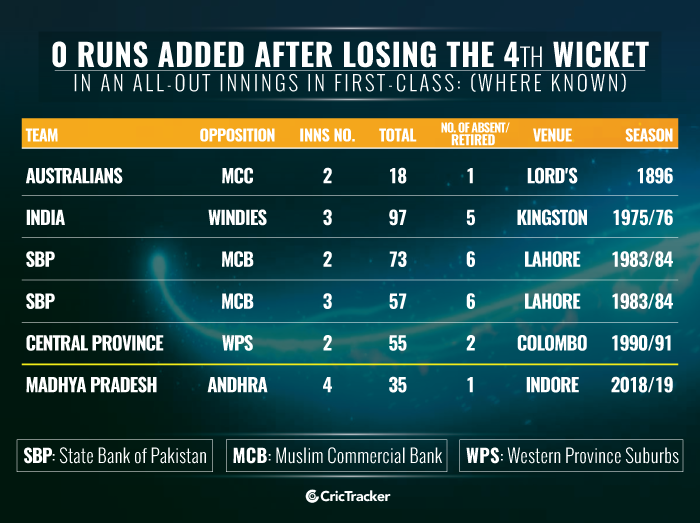