A lot of individual performances went into record books during the Syed Mushtaq Ali Trophy matches played on Tuesday. One of them is Manish Pandey’s unbeaten 129 against Services as he turned up to lead Karnataka less than 48 hours after being part of India’s T20I series win against Bangladesh. The bowling hero Deepak Chahar did the same as he led Rajasthan in the game against Vidarbha.

Manish Pandey’s unbeaten 129 came from only 54 balls as he struck 12 fours and 10 sixes. His innings played a role in powering Karnataka to a huge total of 250/3. This is now their highest T20 total surpassing 242/4 against Mizoram during the previous edition of Syed Mushtaq Ali T20 Trophy. This is also the 3rd highest team total for any team in the tournament’s history. Manish also set a new record of highest Twenty20 score for Karnataka.

He surpassed Devdutt Padikkal’s 122* which was scored about 18 hours before Pandey’s knock. The Karnataka skipper’s unbeaten 129 is also the 6th highest individual score by a captain in the Twenty20 format. Aaron Finch’s 172 against Zimbabwe last year is the only 150+ T20 score by a captain. Suresh Raina’s 126* during 2017/18 season against Bengal was the previous highest by an Indian. In fact, Manish’s 129* is also the 2nd highest individual T20 score by an Indian behind Shreyas Iyer’s 147. 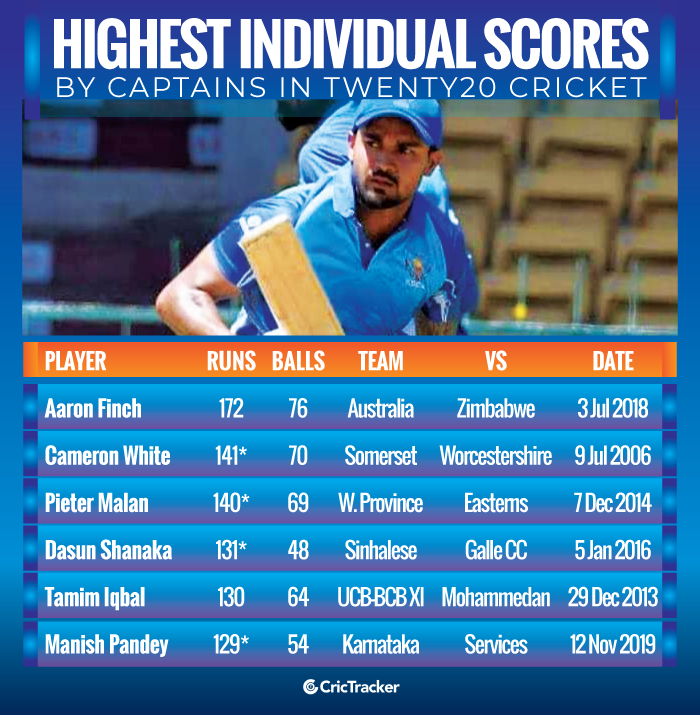 Later, Karnataka registered an 80-run win by restricting Services 170/7. Shreyas Gopal was the key destroyer with the ball as he took 5/19 in his four overs. This was Gopal’s 2nd 5-wicket haul in the Twenty20 format. His first haul also came in 2019 when he took 5/11 against Arunachal Pradesh. Thus, he became the first Indian to take two 5-fers in the same calendar year.

An Indian record for Rajpoot and nearly another hat-trick for Chahar:

Ankit Rajpoot got to bowl only two overs in the game against Tripura as the rain reduced the match to a 6-over affair. However, those two overs were enough for Rajpoot to bag a 5-wicket haul. Ankit bowled the 2nd over of the innings and took wicket off the first two deliveries. Later, he took three wickets on alternative deliveries in last over of the innings. He finished with figures of 5/17 and became only the 2nd bowler in the history of Twenty20 cricket to take a 5-fer by bowling only two overs.

During a T20I in 2017 against Ireland, Rashid Khan finished with an analysis of 2-1-3-5. Rajpoot’s 5-fer kept Tripura to 49/6 and Uttar Pradesh chased it down with four balls to spare. Overall, this was the pacer’s 3rd 5-fer in the T20 format but first to result in a win. Ankit took 5/20 against Rajasthan in 2017 and 5/14 against Sunrisers Hyderabad in 2018 IPL where his teams lost narrowly while chasing. With this effort, Ankit Rajpoot became the first Indian player with three 5-wicket hauls. 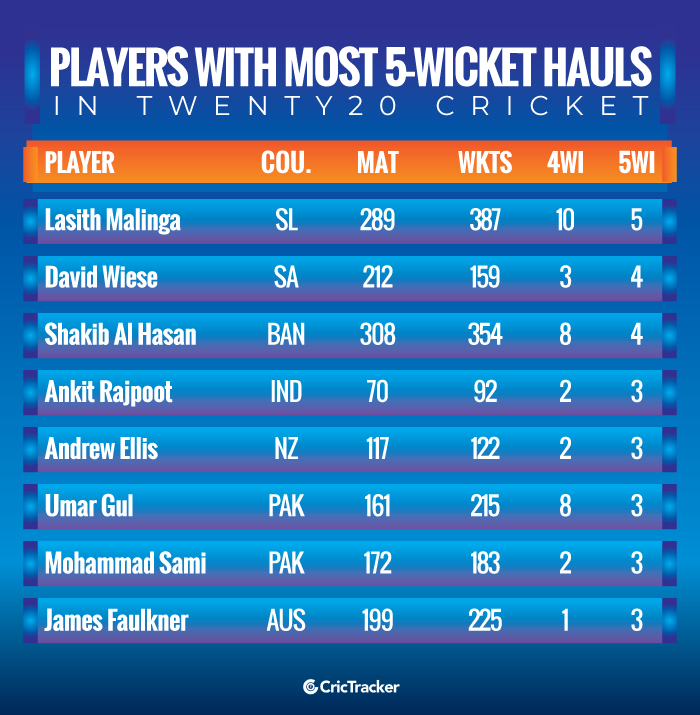 Deepak Chahar was one wicket away from levelling this feat on Tuesday. In the 13-over match, Chahar finished with figures of 4/18 in the three overs he bowled. He took three wickets with his last three legitimate balls. However, he missed his 2nd hat-trick in three days as he bowled a wide between first and second wicket. The 6/7 in the T20I against Bangladesh was Chahar’s 2nd T20 5-wicket haul. Despite Deepak’s efforts with the ball, Rajasthan lost the game by one run on VJD method.