Mithali Raj has been among milestones over the past one week in the ongoing 3-match ODI series against the South Africa Women. The series played in Vadodara was clinched by India Women with a scoreline of 3-0. During the first ODI, Mithali completed 20 years in International cricket. She made her India debut in an ODI way back in 1999. Thus, she became the first woman to have an ODI career of 20+ years and only the 4th player across Men’s and Women’s cricket with an ODI career as long as 20 years.

In the second ODI, the Indian Women recorded their biggest ODI chase of 248 to take a series-winning lead of 2-0. Mithali Raj top-scored for the hosts in this record chase with an 82-ball 66. During this knock, Mithali completed 3000 runs in ODI run-chases and became the first woman with such feat. She is already the first and only till date with 6000 runs in Women’s ODI cricket. The 66-run knock also helped Mithali to complete 2000 runs successful ODI chases, a feat which was not achieved before her in Women’s cricket.

In a low-scoring thriller on Monday, India defended their total of 146 successfully to win by six runs. This was India Women’s 100th win under Mithali Raj’s captaincy in International cricket. Mithali now led India in 80 ODI wins, 17 T20I victories and three Test wins. She is now only four wins away from becoming the most successful ODI skipper in Women’s cricket. The current record for most wins as captain in Women’s ODIs is held by former England captain Charlotte Edwards with 83 victories.

Mithali Raj already holds the record for most runs, most fifties, most appearances, most wins as a player and most matches as captain in Women’s ODI cricket. With the 6-run win, Mithali became the 2nd captain to win 100 matches in Women’s International cricket. The first to achieve this feat was Charlotte Edwards as she won a total of 142 Internationals as the captain of England Women. Meg Lanning will soon join this rare list as the Australia Women skipper won 96 out of 119 International matches.

Most number of wins as captain in Women’s International cricket: 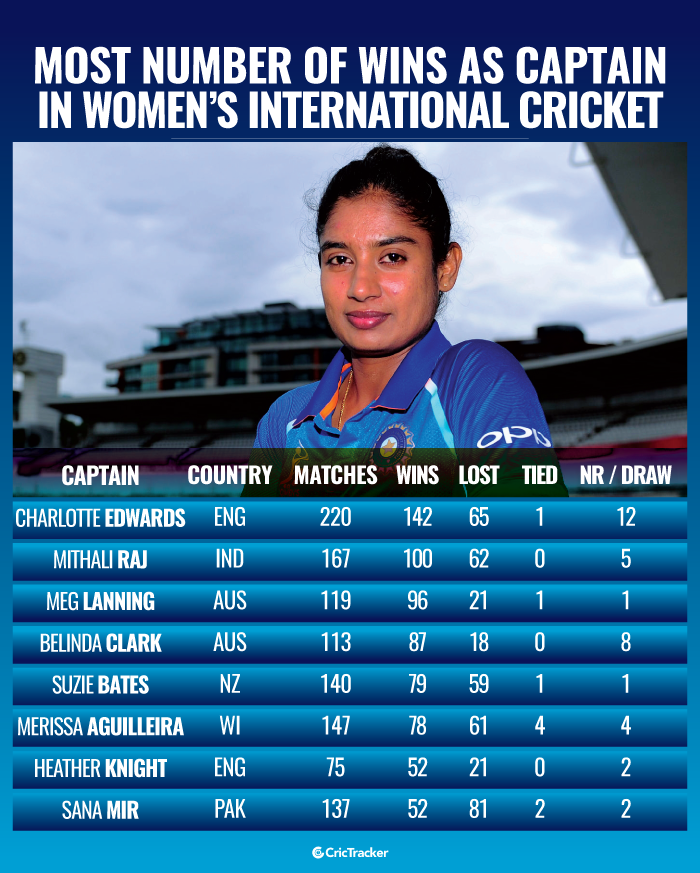