Mohammad Abbas has quickly grabbed the opportunity to spearhead Pakistan’s pace-attack in less than 18 months of his Test debut. The 28-year-old has impressive bowling numbers in the first-class cricket that handed him the Test cap in April 2017 in the Caribbean. Bowling on the slow pitches of Windies and UAE, Abbas racked up 23 wickets in only five Tests in 2017 and bettered his numbers during the tour of Ireland and England.

He claimed as many as nine wickets in Ireland’s debut Test with 4/44 and 5/66 in respective innings. Abbas was up against some experienced campaigners in the first-class circuit in that game. He played a key role in Pakistan’s  big win in the Lord’s Test as the pacer took four-wicket hauls in both the innings. In ongoing Test match in Abu Dhabi against Australia, Abbas completed 50 Test wickets by dismissing Usman Khawaja. The pacer became the joint second quickest Pakistan bowler to complete the milestone after Yasir Shah who did it in his 9th Test.

As many as three Pakistan fast bowlers needed ten Test matches for completing 50 wickets in this format before Abbas. Waqar Younis set the country record in 1990 which was equalled by Shabbir Ahmed and Mohammad Asif in 2005 and 2007 respectively. The trio collectively held the record for fastest to 50 Test wickets for Pakistan until Yasir Shah. Among spinners, Saeed Ajmal and Abdur Rehman took 11 matches apiece for this milestone before Yasir.

Abbas had a perfect chance to level the leg-spinner in the first Test in Dubai where he needed eight wickets to complete 50 wickets. The paceman took four wickets in the first innings and took the first three to fall in Australia’s second innings in the space of five deliveries. However, Abbas failed to scalp one more Aussie batsman in the next 18.3 overs he bowled in the game. Thus, he missed a golden chance to surpass Pakistan pacers in the list.

Quickest to 50 wickets in Test cricket for Pakistan: 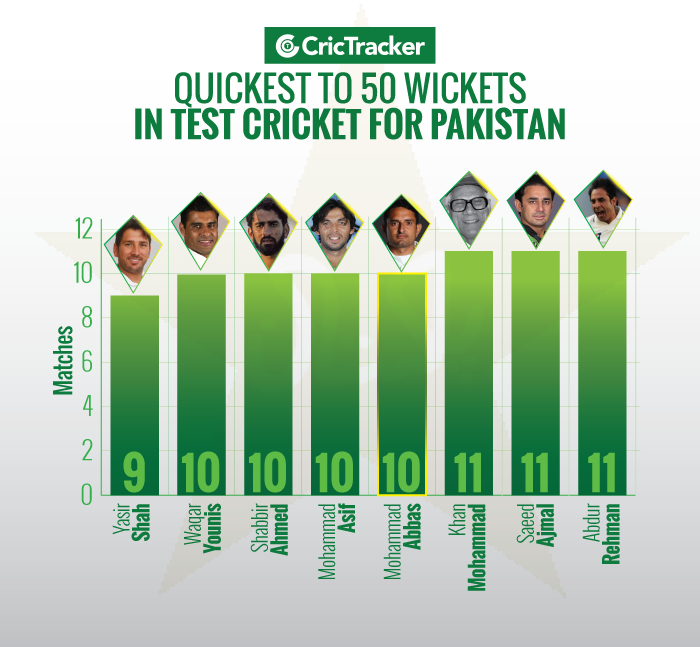 Australia and Pakistan in the UAE 2018Mohammad AbbasPAKvAUSYasir Shah