Stats: Most runs after 21 matches in ODI cricket

Stats: Most runs after 21 matches in ODI cricket

Pakistan's top three is turning out to be terrific in ODIs.

India’s top three comprising Rohit Sharma, Shikhar Dhawan and Virat Kohli is the best at the moment in the World. The trio more often than not plays all the overs which leads to the lack of match practice for the middle-order. However, like them, another top three is shaping up nicely for Pakistan. Imam-ul-Haq, Fakhar Zaman and Babar Azam are shining in South Africa at the moment and these are really great signs ahead of the World Cup.

All the three players are currently topping the list when the first 21 ODIs of the batsmen are taken into consideration. Imam is at the top with 1090 runs after 21 matches in the 50-over format. He has piled on the runs in the ongoing ODI series against South Africa. The opener endured a rare failure in the decider and was dismissed on eight runs. But it was enough for him to surpass his partner Fakhar just by one run.

Fakhar Zaman had amassed 1089 runs in his first 21 appearances for Pakistan which also included a sensational double century against Zimbabwe last year. Moreover, the talented left-hander had amassed close to 600 runs in that five-match series. Babar Azam, Pakistan famous number three batsman, is at the third position in this list. He had 1037 runs to his name after playing 21 ODIs for his country.

However, Azam continued to play the same way after starting well to cement his place on a long-term basis. Zaman and Imam are expected to do the same for Pakistan in the future and their first aim would be to play well in the upcoming World Cup.

The list includes the players like Jonathan Trott and Quinton de Kock who had scored 1028 and 1001 runs after 21 One-Day Internationals. While Trott has retired from the game now and the South African wicket-keeper is still the vital cog of the team and will be the key player for the Proteas in the World Cup.

Most runs in ODIs after 21 matches: 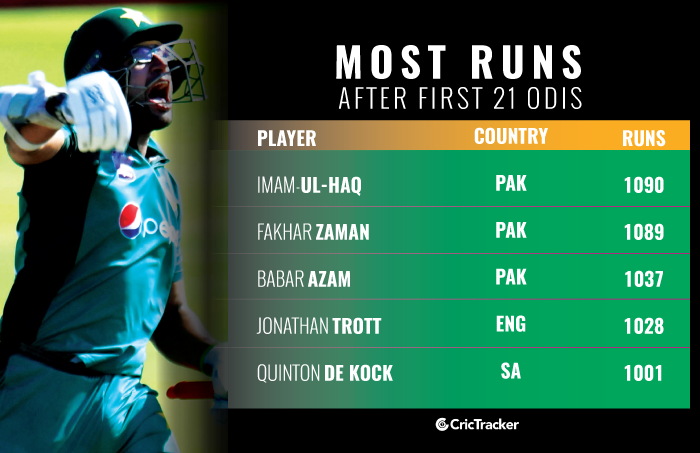