Rishabh Pant holed out when Delhi Capitals needed five runs from 8 balls after scoring a 21-ball 49 against SRH in the Eliminator and has faced criticism.

Not often players who score a 21-ball 49 when the team requires 52 from the last five overs end up facing criticism but Rishabh Pant experienced that on Wednesday. Pant hit boundaries off Basil Thampi and Bhuvneshwar Kumar at the death overs during the Eliminator game in Visakhapatnam. His knock helped Delhi Capitals bring down the required run rate from 10.4 to less than four runs. With five runs needed from eight balls, a lofted shot cut his innings one short of a fifty.

The shot seemed needless considering the fact that they had only three more wickets in hand after his dismissal. But his attacking approach was the reason why DC was narrowing down the difference between their score and Sunrisers Hyderabad’s total in the first place. This is exactly the way Pant has batted throughout the season. Despite not staying there till the very end, the 21-year-old has ensured the target is a lot easier to chase after his departure. His dismissals might look silly but his natural game benefited the team often. Rishabh is often mistaken as someone who is going to be finishing the games but the youngster has ensured his quick cameos don’t require him to stay there till the end. Pant is expected to fill the shoes of MS Dhoni, who is renowned for his finishing skills. At the age of 21, the expectations are just too high from the keeper-batsman despite being brilliant at what he has been doing. Pant recently reacted keeping all the critical acclaim in mind asking the people to give him some time to match their expectation.

“Things don’t change overnight. I am just 21. It’s difficult to think like a 30-year-old man.” said Pant. In fact, Dhoni didn’t have a great record at finishing by the time he made a mark in Indian colours. In nine instances when he batted at No.3 or lower position, Dhoni remained unbeaten only twice in his first six seasons in List A cricket. He fell cheaply on two instances when his teams needed less than 50 runs as they lost by narrow margins.

Dhoni vs Pant while chasing: 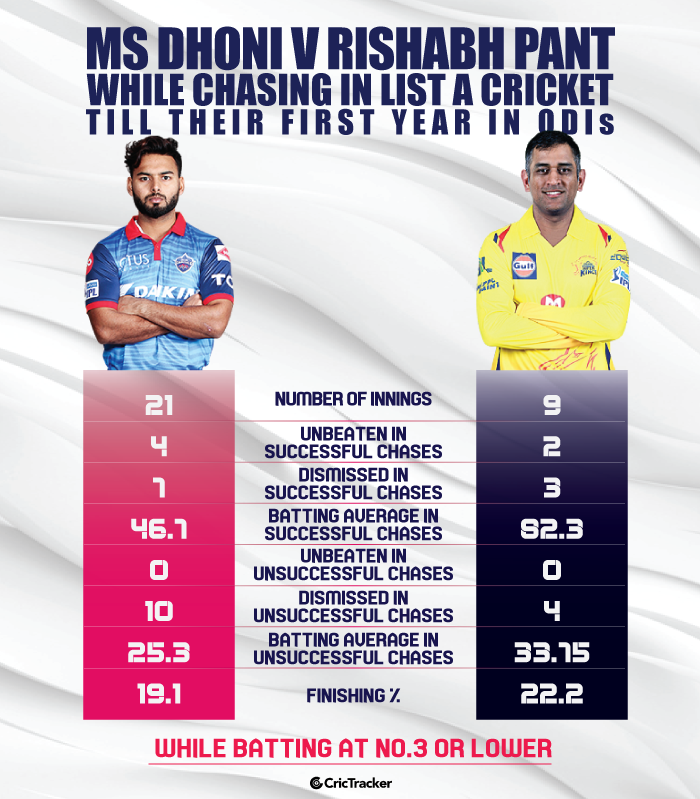 Dhoni was in the aggressive mould at the start of his India career similar to what Pant is at the moment. However, as years passed, Dhoni played second fiddle to ensure that he stayed there till the end. In this process, his Strike Rate came down to around 80s from 100+. The change in approach was seen after the World Cup 2007 debacle and he became the Indian captain in the limited-overs formats which didn’t allow Dhoni to switch back to his natural game. It is tough to predict whether Rishabh Pant would turn into someone like Dhoni just as they have a similar beginning to their careers. However, at the moment, Pant’s style and approach is perfectly suited for the limited-overs and if he continues to bat at No.4 or No.5. Him missing at the World Cup 2019 could hurt the Indian team as they do lack a dynamic batsman who could make most of the middle overs.