Here are all the records and stats from Sarfaraz Khan's maiden triple century.

Sarfaraz Khan produced his career-best effort as he struck an unbeaten 301 for Mumbai in the 2019-20 Ranji Trophy game against Uttar Pradesh. The 22-year-old walked to bat when Mumbai were 128/4 in response to UP’s massive total of 625/8. Sarfaraz then shared three straight 150+ partnerships to give Mumbai a chance of sealing the first-innings lead.

He shared 210 for the 5th wicket with Siddhesh Lad, 179 with Aditya Tare for the 6th wicket and a 150-run stand for the 7th wicket with Shams Mulani in only 27.4 overs. Mumbai took the lead when Sarfaraz was in his 260s but the management wanted him to continue the batting instead of agreeing for a draw. He raised up his triple ton with his 8th six on the 388th ball he faced.

Here are all the records and stats from Sarfaraz Khan’s maiden triple century:

3 – Sarfaraz Khan became only the 3rd player to score a triple century in first-class cricket while batting at No.6. Karun Nair scored 328 for Karnataka in the 2014/15 Ranji final against Tamil Nadu also at the Wankhede Stadium. Marco Marais made an unbeaten 300 for Border during the 2017/18 season at this batting position. In fact, Marais got to his 300 in only 191 balls; the fastest triple century in this format. 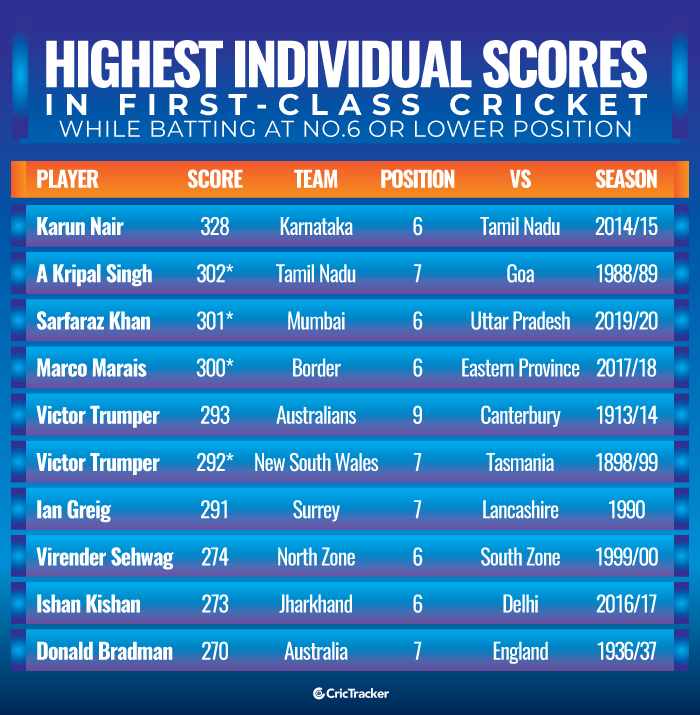 7 – Sarfaraz Khan is now only the 7th player to score a triple hundred in first-class history while representing Mumbai. The last of the previous six players was Rohit Sharma in December 2009 where he scored an unbeaten 309 against Gujarat. Between Rohit and Sarfaraz’s triple tons, no player from Mumbai had even recorded a 250+ score in first-class cricket.

Overall, Sarfaraz is only the 3rd Mumbai player with an FC triple ton at the iconic Wankhede Stadium. Sanjay Manjrekar scored 377 in the 1990/91 season against Hyderabad which was also the highest individual FC score for Mumbai. Earlier in 1981/82, Sunil Gavaskar got 340 against Bengal at the Wankhede. 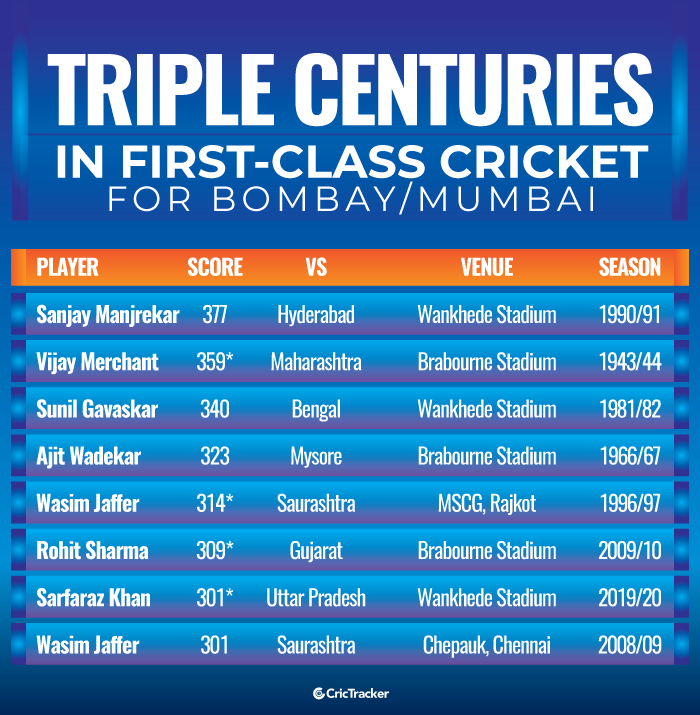 22y 84d – Sarfaraz was 22 years and 84 days old at the start of this match; the 2nd youngest player with an FC triple for Mumbai. Wasim Jaffer was 18 years and 262 days old when he scored an unbeaten 314 against Saurashtra in 1996/97 season. Jaffer also became the youngest Indian to score a first-class triple century with that knock and still holds the record. Sarfaraz finds himself at No.7 in the list of youngest Indians with an FC 300.