Stats: Pakistan hold the record of bowling an opposition out most times in T20Is

Stats: Pakistan hold the record of bowling an opposition out most times in T20Is

Pakistan have won the T20I series against Zimbabwe 3-0.

Pakistan may have lost their number one rankings in T20Is, but that they are one of the strongest teams to beat can’t be denied by any stretch of the imagination. The team, led by Babar Azam, defeated Zimbabwe 3-0 in the T20I series, stamping their authority. All three wins were pretty comprehensive and Pakistan showed the potential their players carry in the format.

In the third and final T20I, they beat the visitors by eight wickets. After being put in to field first, Pakistan restricted Zimbabwe to 129 for the loss of nine wickets in their 20 overs. Usman Qadir, who picked three wickets in the second T20I, was again on top of his game. He picked up four crucial wickets in his four overs and conceded a mere 13 runs with a number of dot balls.

From Zimbabwe, skipper Chamu Chibhabha top-scored with 31 runs off 29 balls with three fours and one six. Donald Tiripano scored 28 runs lower down the order, but it was only to mitigate the damage caused earlier. Milton Shumba and Wellington Masakadza also got into the double figures, but their efforts weren’t enough for Zimbabwe to get a substantial score under their belt.

The run-chase was a relatively easy one for Pakistan as they achieved the target of 130 with 28 balls to spare. Fakhar Zaman and Haider Ali got into the 20s and gave their wickets away. But Abdullah Shafique and Khushdil Shah made sure that the home team didn’t have many hiccups. Shah was the more attacking of the two, scoring 36 off 15 balls with the help of three fours and as many sixes.

Pakistan right up there with a unique record

In the meantime, apart from the victory, Pakistan also hold a unique record. The Men in Green have bowled an opposition out 31 times in 157 T20I matches. It’s a world record with Australia second in the list with 22 dismissals. West Indies and Sri Lanka are tied on 21 each. Zimbabwe have been the worst of the lost as only on four instances have they been able to bowl an opposition out. 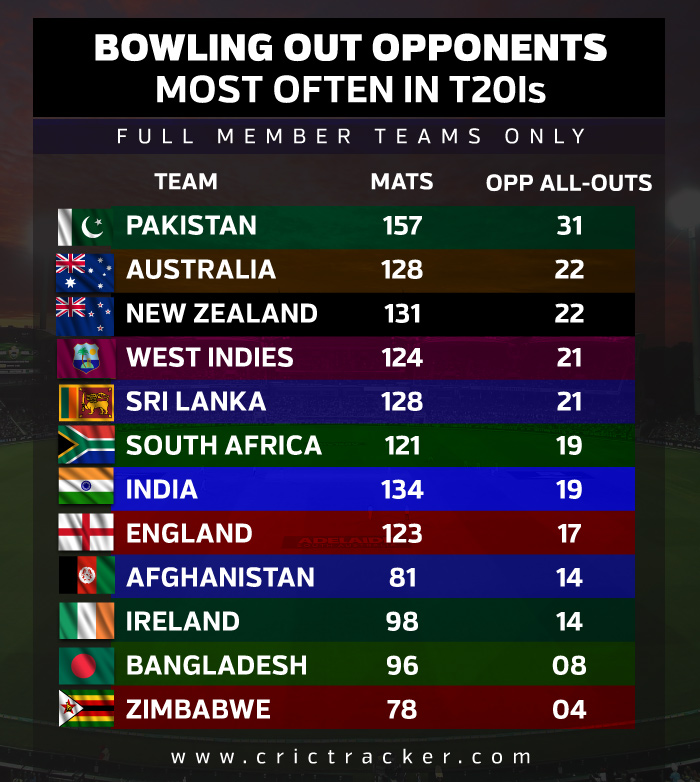