Quinton de Kock made eight dismissals behind the wickets during the 2-match Test series against Sri Lanka.

Quinton de Kock stands at the top in terms of wicketkeeping skills among the current crop being one of the safest and athletic catchers. The South African has owned the keeper-batsman slot in his team’s playing XI from the moment he made an impression with his glovework and also with the bat. De Kock is known for being a safe keeper not only in seaming conditions but also in the spinning tracks in Asia.

During the 2-match Test series against Sri Lanka, de Kock had to keep in the conditions where the ball took an uneven bounce. He conceded only 13 byes across four innings with seven of them coming on the first day itself while the Sri Lankan keeper Niroshan Dickwella gave way 20 byes during this series. De Kock finished with eight dismissals from this series with five of them being on the first day of the Test series.

De Kock completed the milestone in only 34 Test matches and 64 innings as a keeper. He did not keep wickets in his debut Port Elizabeth Test in 2014 against Australia as AB de Villiers played that game as a designated keeper. Thus, de Kock became the quickest to 150 dismissals as keeper in Test cricket surpassing Adam Gilchrist, who needed 36 matches. Gilchrist and Boucher needed 70 innings for this milestone, six more than what de Kock needed.

Earlier during the 2017 Old Trafford Test match against England, de Kock completed 100 dismissals behind the stumps. He thus became the joint fastest in terms of matches to complete 100 keeping dismissals. De Kock needed 22 matches, same as Adam Gilchrist for this milestone. However, in terms of innings, the South African (39 innings) edged past Gilchrist who needed 43 innings.

Fastest to 150 dismissals as wicketkeeper in Test cricket: 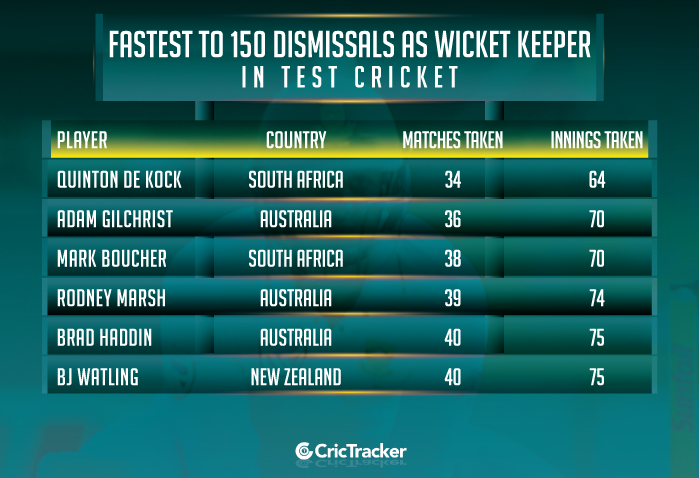