Rahul Chahar finished with the figures of 4-1-5-3 in Monday's game against Maharashtra.

The Lalabhai Contractor Stadium in Surat has produced some low-scoring matches in this Syed Mushtaq Ali Trophy where the spinners showed their dominance. The two matches played here on Monday showed how tough it could get for batting. In the afternoon game, Tamil Nadu lost six wickets and took 19.3 overs to chase the target of 95 set by Punjab. Washington Sundar played a key role in chase scoring an unbeaten 44-ball 45 following his spell of 4-0-6-0 with the ball.

Later in the evening, Maharashtra struggled to get going against Rajasthan who lost their first two matches of the Super League. The Maharashtra team could only manage 99/9 despite playing full 20 overs. Leg-spinner Rahul Chahar was the star with the ball in this match as he picked up three wickets and conceded only five runs in his four overs. He finished with the bowling figures of 4-1-5-3 and bowled the 19th over of the innings conceding only two singles.

Chahar’s first two overs cost just three runs and he dismissed both openers while his 3rd over turned out to be a maiden. Rajasthan chased down the target with 22 balls to spare for the loss of four wickets. The five runs conceded by Rahul Chahar are the 2nd fewest by a bowler in a Syed Mushtaq Ali T20 Trophy game after bowling full quota of four overs. Three players conceded only four runs while nine players gave away five runs in the four overs they bowled. 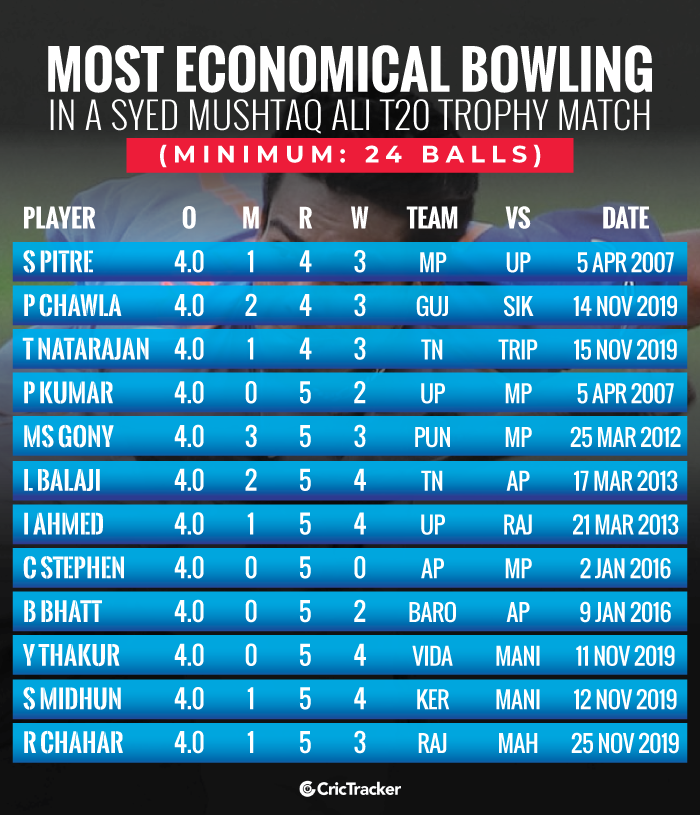 Five out of the 12 instances of a bowler conceding as few as five runs in SMA T20 Trophy game are recorded in the ongoing edition of the tournament. No Indian outside this tournament has conceded less than six runs in a Twenty20 game after bowling four overs. Overall, only three times a leg-spinner from India gave away as few as five runs in their four overs of a T20 match. All three instances recorded in this competition itself. Kerala’s Sudhesan Midhun took 4/5 against Manipur on 12th November.

Two days later, Piyush Chawla took 3 wickets for 4 runs against Sikkim to set a new record. This match was also hosted by the Surat’s Lalabhai Contractor Stadium. The previous fewest runs conceded by an Indian leg-spinner in a T20 match were six runs. Chhattisgarh’s Shubham Agarwal had figures of 3/6 against Railways in 2016/17 edition of SMA T20 Trophy. In the 2019 IPL opener, Yuzvendra Chahal recorded figures of 4-1-6-1 against CSK but couldn’t stop RCB from losing the match. 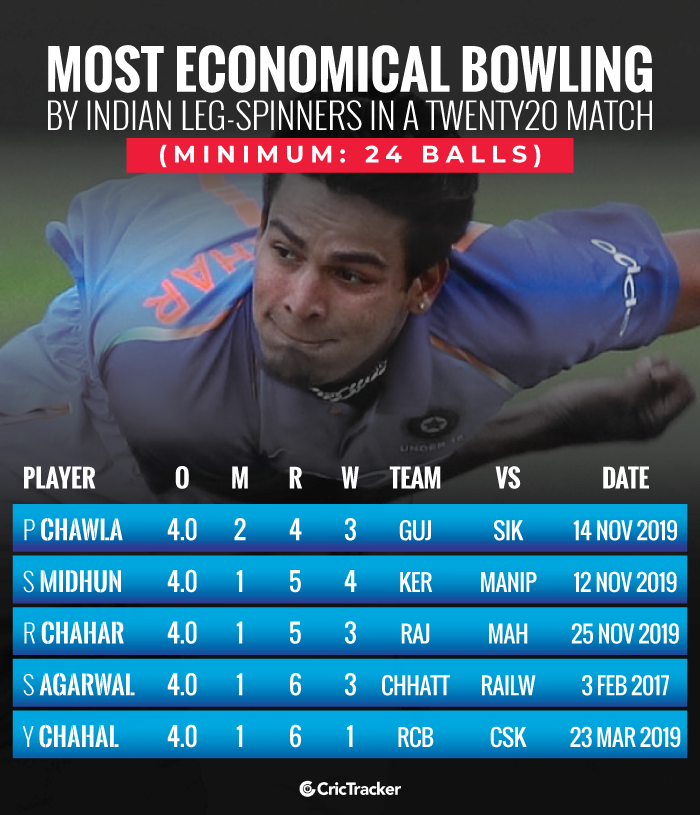