Ashwin has now picked 266 wickets at home in Tests.

India are dominating the ongoing second Test against England in Chennai. After posting 329 runs in the first innings, the hosts are all over the England batsmen courtesy of their premier off-spinner Ravi Ashwin. Chennai is his home and Ashwin is making all his experience count of playing at the Chepauk.

Ashwin becomes almost unplayable even if he gets the slightest of assistance from the pitch and the same is happening in Chennai. He has picked up wickets of Dom Sibley, Dan Lawrence, and Ben Stokes. The delivery to castle Stokes was an absolute beauty as he beat the batsman in flight and with that, Ravi Ashwin also went past Harbhajan Singh in terms of most wickets at home in Tests.

The off-spinner has now accounted for 266 scalps at home in the longest format of the game in just 45 Tests at an impeccable average of 22.64. Ashwin has 22 five-wicket hauls in home conditions and is at the joint-fourth spot in this aspect with James Anderson. Harbhajan had picked 265 wickets in 55 matches at an average of 28.77 in India.

Ravindra Jadeja is another active player in this list and is at the fifth position. The left-arm spinner has scalped 157 wickets in 33 Tests at an average of 21.06 with seven five-wicket hauls and would’ve added more to his tally if he hadn’t sustained a finger injury in Australia. Currently, he is recovering from the same and has been ruled out of this series.

Anil Kumble, the legendary leg-spinner, is at the top of the pile having picked a mammoth 350 wickets in 63 Tests at home at an average of 24.90. Kapil Dev, Javagal Srinath, and Zaheer Khan are the only three pacers in the top 10 most wicket-takers at home for India in Tests.

As far as Ravi Ashwin is concerned, he is close to reaching 400 wickets in Test cricket and many are expecting for him to reach the milestone in the series against England itself.

Most wickets in Tests for India at home 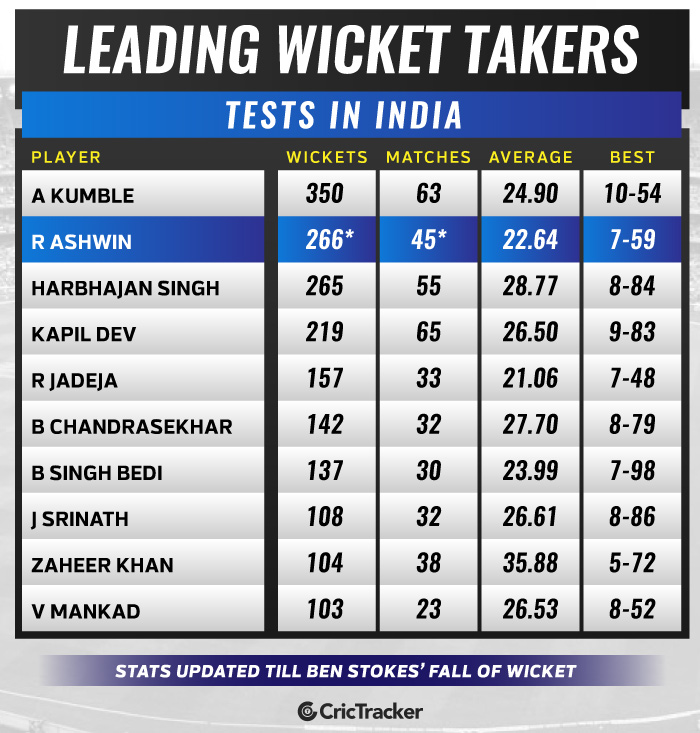