Ravindra Jadeja has slowly emerged as India’s first-choice spinner in Test cricket as he played the recent most Test series in the West Indies as the lone specialist spinner. In this process, the team management preferred Jadeja ahead of Ravichandran Ashwin who has added many records to his name in the longer format. The left-hander’s batting numbers in the recent past also played a role in his selection. Jadeja is well known to be keeping things tight with the ball from his end, even if he doesn’t get wickets.

However, in the ongoing Vizag Test against South Africa, Ravindra Jadeja couldn’t replicate his magic on the 3rd day. India failed to break the 5th and 6th wicket partnerships while Jadeja turned to be the most expensive specialist bowler for India. Opener Dean Elgar smashed him for five fours and three sixes. The left-arm spinner had the last laugh as Elgar turned out to be Jadeja’s 200th Test wicket as his slog sweep went into the hands of Cheteshwar Pujara in the outfield.

Quickest to 200 wickets in Test cricket for India: 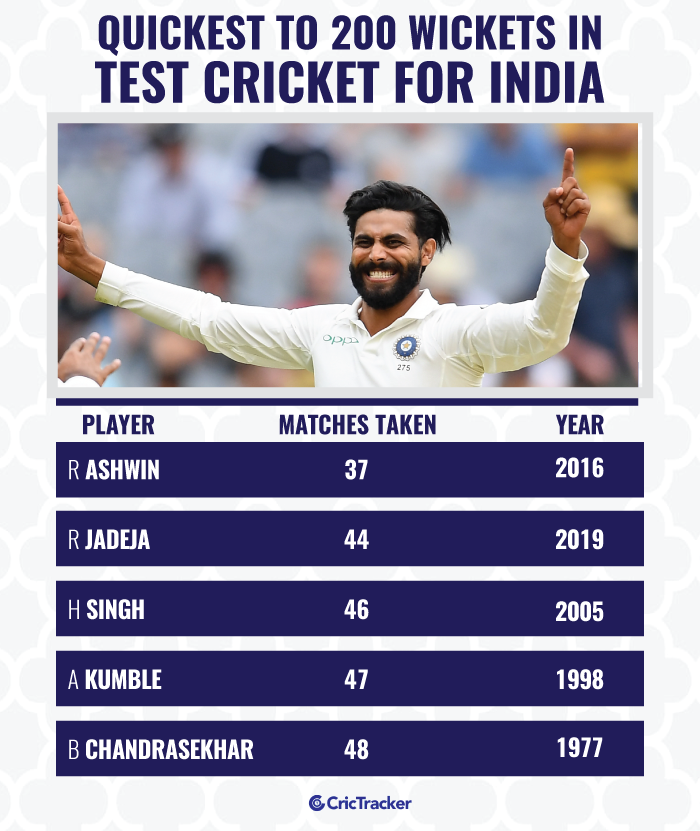 Ravindra Jadeja needed only 44 games to complete 200 wickets in Test cricket; the 2nd fastest to do so among Indians. Ravichandran Ashwin is the quickest having taken only 37 Tests and stands at No.3 in the overall list. Jadeja thus pushed Harbhajan Singh and Anil Kumble behind, who needed 46 and 47 Tests respectively. Ashwin and Jadeja shared the top two spots in the list of fastest Indians to 150 Test wickets as well. Jadeja raced to 150 wickets in 32 Tests by taking only 8 matches from 100 to 150 wickets.

Jadeja could have reached 200 Test wickets a 1-2 of Tests early had he not played in the West Indies tour. The domination by the pacers let him pick only six wickets across two Tests in that series. However, Jadeja, in 44 matches, is also the quickest left-arm bowler in the history of Test cricket to claim 200 wickets. He thus broke the record held by Rangana Herath from only 47 Test matches. Mitchell Johnson occupies the 3rd place in this list having taken only 49 Tests. 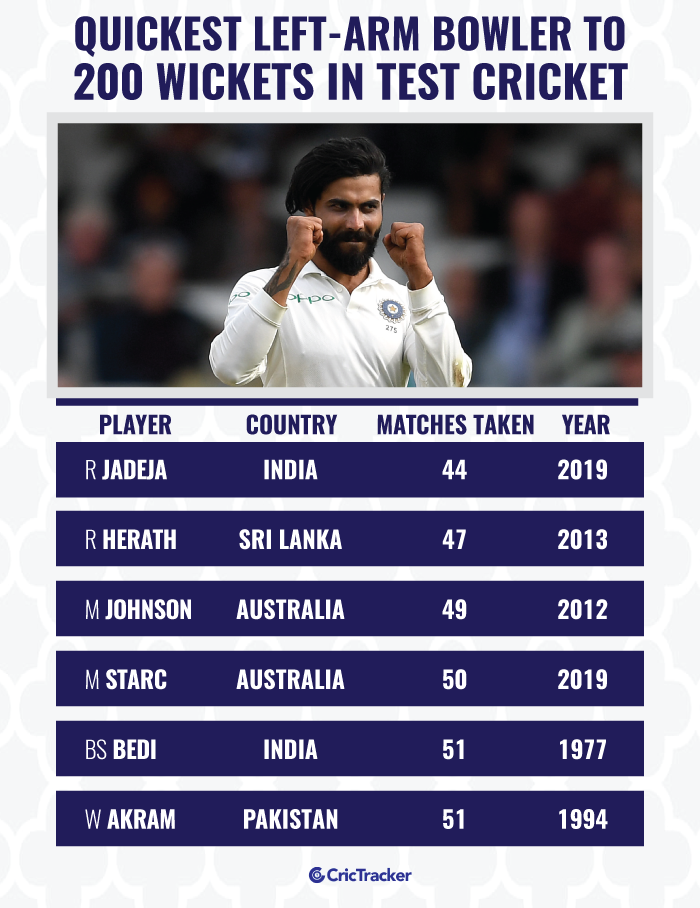