Rishabh Pant became only the 6th player to claim five catches in an innings on Test debut.

Rishabh Pant made a dream start to his Test career opening his account with a six off the 2nd ball he faced and followed it with five catches in his first appearance behind the wickets for India. He was involved in the first three wickets to fall and became only the 3rd player to catch the opposition’s first 3 wickets on Test debut. India’s Bharath Reddy in 1979 and Australia‘s Tim Paine in 2010 were the first two players to have done that.

Pant claimed the catches of England openers Alastair Cook and Keaton Jennings off consecutive deliveries after the pair added 54 runs in just 12 overs. Ollie Pope was caught by Pant down the leg-side as the Delhi-keeper was involved in all the first three wickets to fall in the innings. KL Rahul gave Pant a bit of break getting rid of the next three batsmen with catches at second slip. Hardik Pandya’s magical bowling spell ensured Pant finished with five catches in an innings on debut.

Read had six dismissals in an innings that included a stumping. Australia’s Phil Emery also claimed five dismissals on his Test debut in 1994 against Pakistan as he took four catches and effected a stumping. Another Australian keeper Wally Grout claimed six catches in the 2nd innings of the 1957 Johannesburg Test. He is the only player with six catches in an innings on Test debut. Pant will hold the record for most catches on Test debut if he takes three more in the 2nd innings.

Most catches in an innings by a player on Test debut: 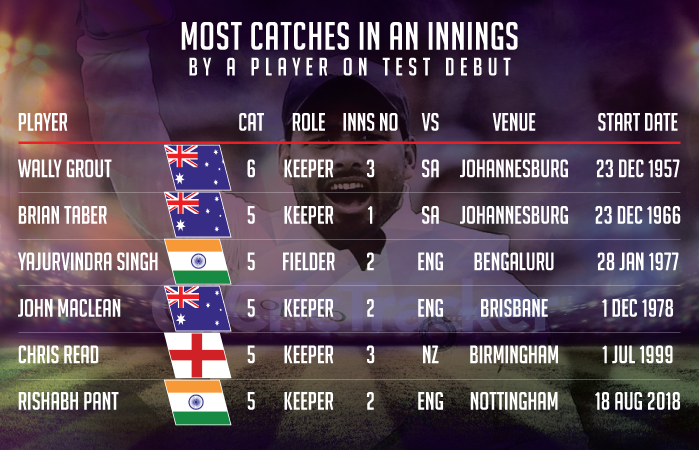