Stats: Rohit Sharma achieves a rare feat as opening batsman with his century

Stats: Rohit Sharma achieves a rare feat as opening batsman with his century

Rohit Sharma scored a century in his maiden outing as a Test opener.

The most talked point ahead of the 3-match Test series between India and South Africa was Rohit Sharma taking the opening position. The 33-year-old has been a superstar in the limited-overs as is only behind Virat Kohli when it comes to ODI format. However, after nearly six years of struggle in the Indian Test XI in the middle-order, Rohit got a chance to move up the order. The struggles of existing opening batsmen gave a chance for Sharma to replicate his limited-overs success.

He did succeed in his first outing scoring an unbeaten century on the first day of the series. Rohit scored an unbeaten 115 from 174 balls with 12 fours and five sixes. India score 202/0 from 59.1 overs with Mayank Agarwal who remained unbeaten on 84. The bad light stopped the play about five minutes before the Tea interval. The rain that followed didn’t allow any further play on the first day. With the unbeaten hundred, Rohit Sharma became the first Indian to score a century as an opener in all three formats.

He has scored 25 tons as an opener in the ODI format and four tons in the T20I cricket. Exactly four years ago, on October 2nd, Rohit scored his maiden T20I century also against South Africa. He added three more to his tally in the last two years but no other Indian scored a ton while opening in this format. KL Rahul and Suresh Raina scored tons in the shorter format but while batting at No.3 and lower. Among the top sides, only England and South Africa don’t have an opener who has scored a hundred with centuries in all three formats.

New Zealand is the only team that has two such players. Martin Guptill and Brendon McCullum achieved this feat for the Blackcaps. Chris Gayle was the first to join the list when he became the first centurion in the T20I format on the first day of the inaugural edition of the WT20 in 2007. In fact, Rohit Sharma also became the first player with four centuries in all the three International formats as he is the only player to score more than three T20I hundreds to date.

Centuries in all three formats as opener in International cricket: 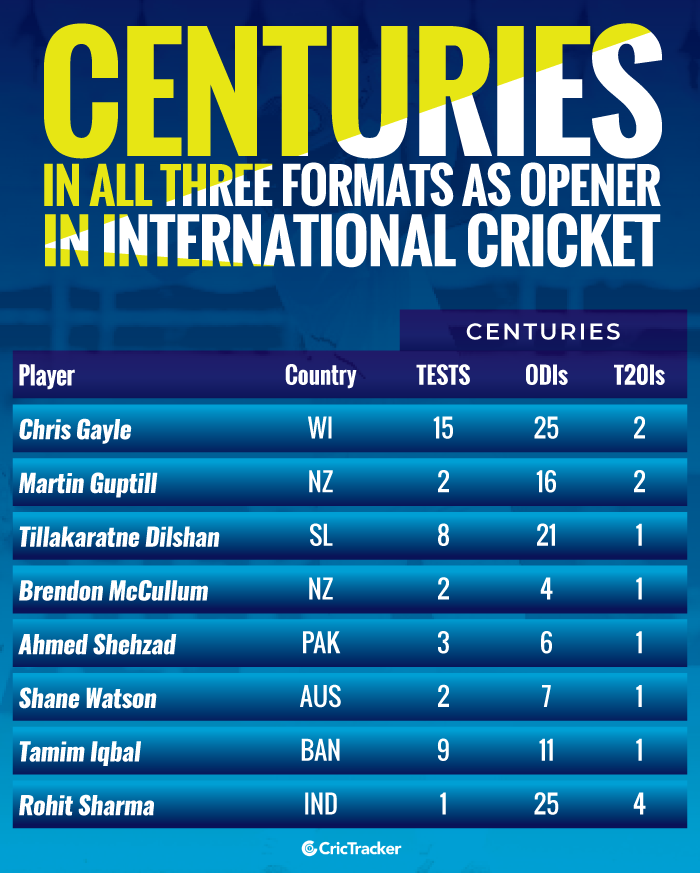