Rohit is also third in the list of highest run-scorer in the tournament's history, only behind Virat Kohli and Suresh Raina.

Defending champions Mumbai Indians, after suffering a five-wicket defeat against Chennai Super Kings in the season opener, locked horns with Kolkata Knight Riders in the fifth match of IPL 2020 at Abu Dhabi. Rohit Sharma and his troops were put to bat first by Dinesh Karthik on a pitch which was looking to dish out ample runs.

Playing the same XI which they played against CSK, Rohit walked out in the middle along with Quinton de Kock. However, MI failed to build a stable opening stand as they South African was sent back to the pavilion in the second over by 21-year-old Shivam Mavi.

In pursuit of a dominant total, especially after De Kock’s departure, skipper Rohit started slamming boundaries while getting into a rhythm. Combining his impeccable timing with sublime batting technique, Rohit notched up a 39-ball half-century. He stitched his 80-run knock around 3 fours and 6 sixes, paving his way up in the list of batsmen with most sixes in IPL history.

Chris Gayle leads the list with a staggering 326 sixes

In 190 IPL matches, Rohit has now slammed 200 sixes. He is also third in the list of highest run-scorer in the tournament’s history, only behind Virat Kohli and Suresh Raina. Rohit might be third in top run-scorers’ list but he has now slammed more sixes than Kohli (190) and Raina (194).

The first in the list is ‘Universe Boss’ Chris Gayle. Since the inception of the IPL, the Caribbean giant has produced several knocks while plying his trade for multiple franchises. In 125 IPL games, Gayle has slammed 326 sixes and 368 fours– most by any player.

The second in the list is the integral pillar of Royal Challengers Bangalore camp– AB de Villiers. Mr 360 has smoked 214 sixes in his IPL career so far while playing 155 matches. The third in the list, a rank above Rohit, is Chennai Super Kings’ skipper MS Dhoni.

The former India skipper has been a crucial part of CSK set-up since the tournament’s inception and in 192 games, he has smacked 212 sixes. Rohit, who is currently on 200 sixes, has ample time to surpass De Villiers and Dhoni if he keeps delivering consistently this season.

The MI skipper was eventually dismissed on 80 by Shivam Mavi. His innings came to an end after he tried to clear long on but gave it straight into the hands of Pat Cummins. 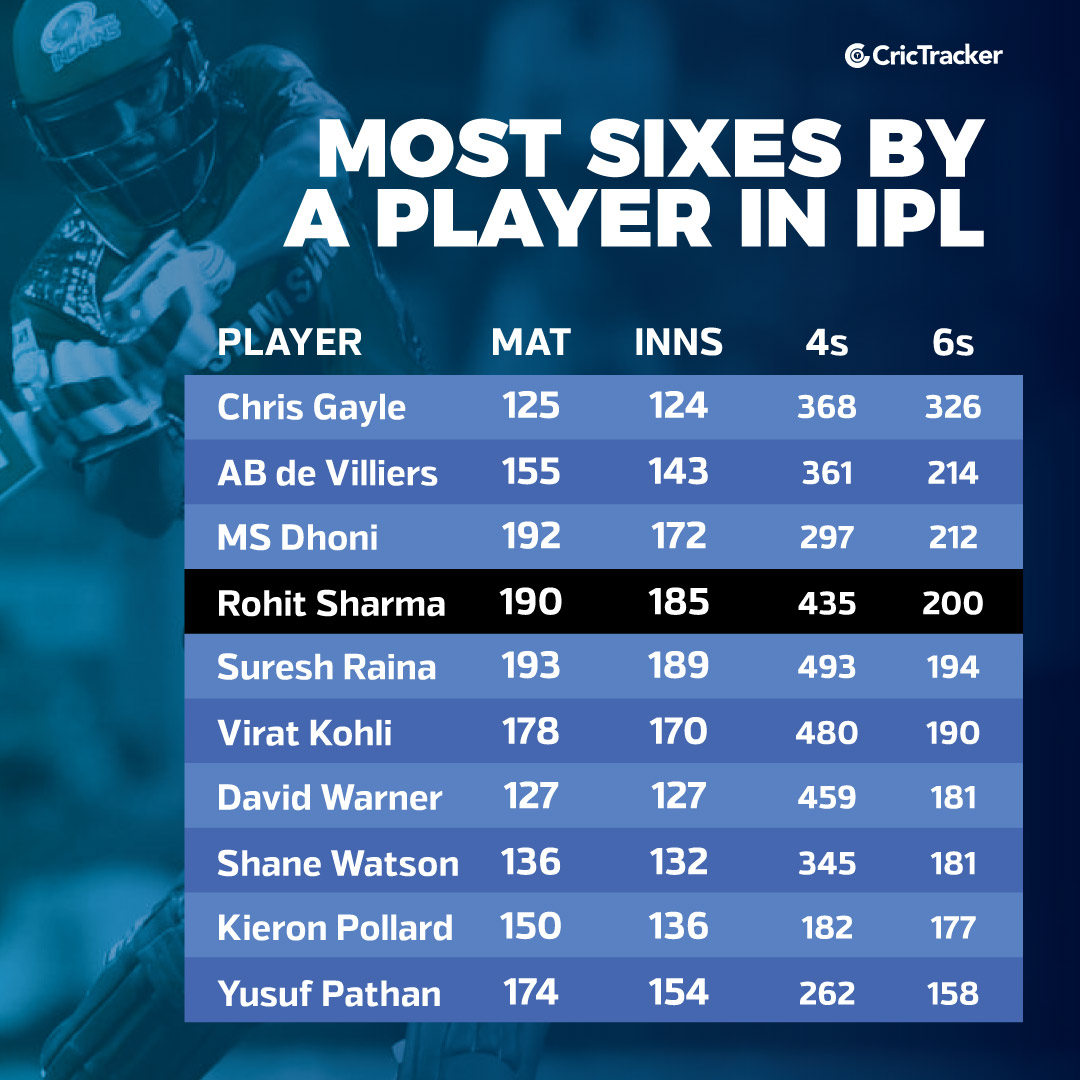