He went past Abid Ali who had scored 209* for Islamabad against Peshawar in 2017-18 season.

Kerala’s wicketkeeper-batsman Sanju Samson created history on Saturday. He registered the highest score of 212* by a wicketkeeper in List-A cricket. He went past Pakistan’s Abid Ali and Kamran Akmal, the only two other keepers to score a double ton in a domestic 50-over game. Sanju Samson achieved the feat during the ongoing Vijay Hazare game against Goa at the KSCA ground in Alur.

Sanju Samson, who has played one T20I for India way back in 2015, has been making waves in domestic cricket for quite some time. Recently he also played a brilliant knock of 91 for India A against South Africa A in Thiruvananthapuram. However, in the match against Goa, Samson took advantage of the opportunity he got to slammed his maiden List-A ton.

He reached his century in just 66 balls and along with Sachin Baby, added 338 runs for the third wicket. Sanju Samson, however, carried his amazing form and completed his double century in just 125 balls and finished with 21 fours and 10 sixes, as Kerala registered 377/3 in 50 overs.

Samson’s innings became the highest score by a keeper beating the previous best of 209* from Abid Ali which came against Peshawar in 2017-18 season. After Abid Ali’s score, comes Kamran Akmal’s 200 which is the only other score double-hundred by a keeper. He scored his double ton for WAPDA against Habib Bank Ltd.

Former India captain MS Dhoni also features in the list for his amazing 183*, the highest score by an Indian keeper in ODIs, which came against Sri Lanka in Jaipur in 2005. Dhoni was promoted to no.3 spot and slammed this amazing century as India chased a stiff target of 299 runs. The next best score is 178 runs made by Henry Nicholls and Quinton de Kock.

Nicholls made the score for Canterbury against Wellington and Quinton de Kock slammed it against Australia for South Africa. The former cricketers like Gautam Gambhir and Harbhajan Singh have lauded Sanju Samson for his good run in domestic cricket. The former even called him the solution to India’s no.4 problem before the World Cup. 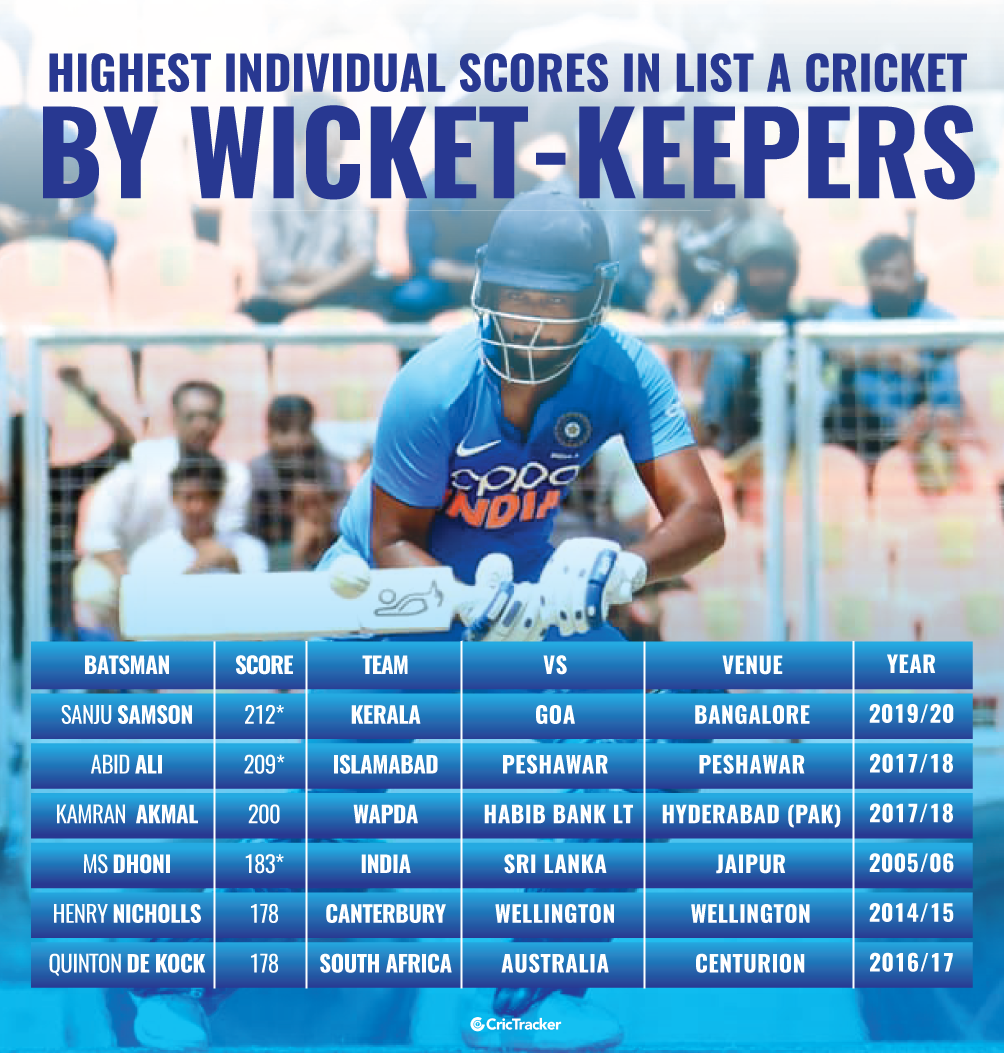