Stats: Sarfaraz Khan follows up his maiden triple century with an unbeaten 226 in Ranji Trophy

Stats: Sarfaraz Khan follows up his maiden triple century with an unbeaten 226 in Ranji Trophy

Sarfaraz Khan scored 226* and 301* in his previous two innings in first-class cricket.

Sarfaraz Khan seems to be going through a purple patch with the bat as he scored an unbeaten double ton in the rain-affected Ranji Trophy match against Himachal Pradesh. This knock came in less than a week’s time from his unbeaten triple hundred at the Wankhede Stadium against Uttar Pradesh to secure three points for the home team. In the 7th round game at the Dharamsala, only 75 overs of play was possible in the whole match.

The 2nd, 3rd and 4th days of the game were called off without the players even taking the field. On the first day, Mumbai lost their top inside five overs at the score of 16. Sarfaraz, who walked at No.5, got to a 62-ball fifty continuing his unbeaten 301-run knock in Mumbai. In the first hour of post-lunch session, the 22-year-old took on Pankaj Jaswal and struck seven fours in space of two overs. He soon raised his 3rd first-class century in only 102 balls.

Sarfaraz slowed down after the dismissal of Aditya Tare which brought an end to their 143-run stand. But he switched gears after returning from the Tea break raising his 150-run mark in only 173 balls. Sarfaraz started to attack every ball as he took another 26 deliveries to bring up his successive double hundred. By the time of stumps, Sarfaraz was unbeaten on 226 off 213 balls as he scored 76 runs across his last 40 deliveries. 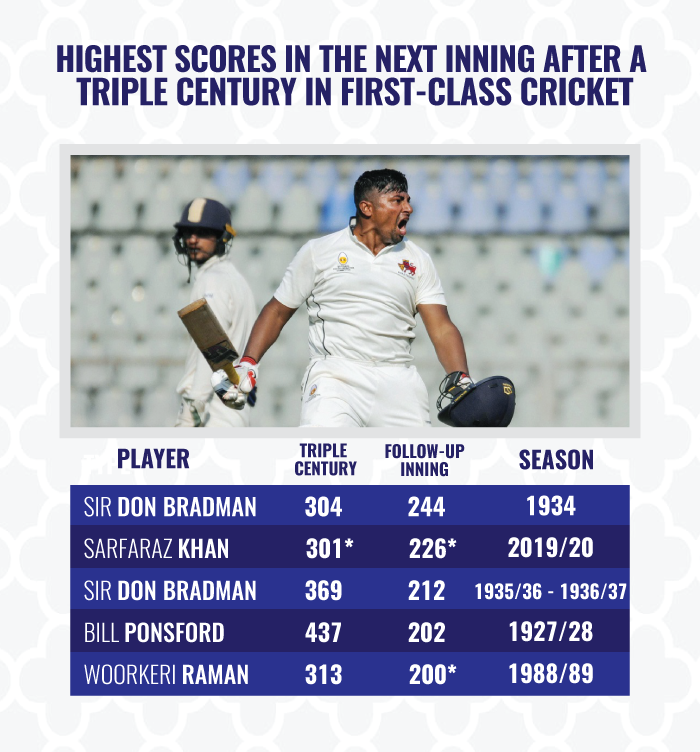 With this double century, Sarfaraz Khan became only the 4th player to follow-up his triple century with a double ton. The unbeaten 226 by Sarfaraz is now also the 2nd highest score in the next FC innings after a triple ton. Only Sir Donald Bradman recorded a higher score as he scored 304 and 244 in consecutive innings during the 1934 Test tour of England. Later in 1936, Bradman scored 369 and 212 runs in consecutive innings. If not for the three successive days of no play, Sarfaraz Khan could have broken Bradman’s record.

The Mumbai batsman was set towards becoming the first-ever player with consecutive triple hundreds given the way he was batting. Till date, only two players managed to record 250+ scores in successive FC innings – by Glenn Turner (259 & 259) in 1971/72 and Mossadek Hossain (250 & 282) in 2014/15. Sarfaraz could have found himself in this list had there were at least 2-3 more overs of play was possible on day 1. 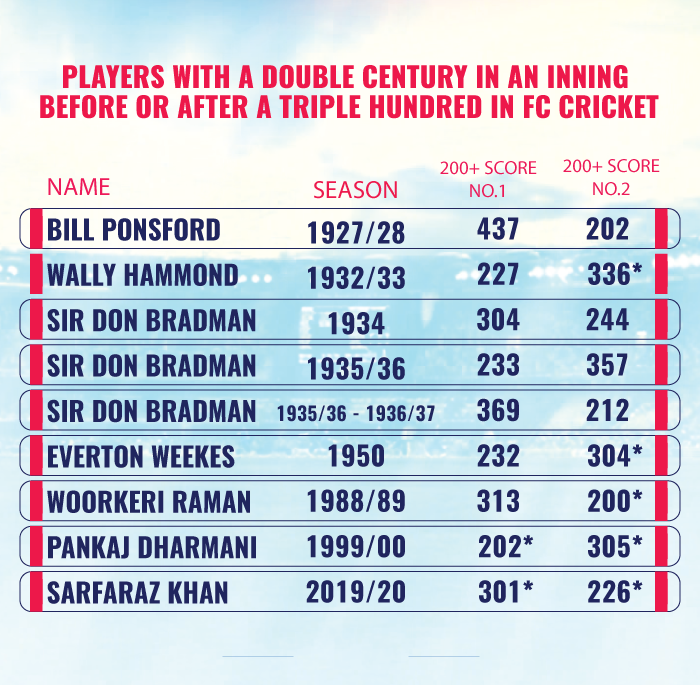