The overall record is on the name of England’s William Astill who played a whopping 424 first-class matches before his debut in Test cricket.

Shahbaz Nadeem finally got a chance to represent India in the whites as he made his Test debut in the ongoing 3rd Test against South Africa which began on Saturday. Nadeem was called upon the eve of the Test match with Kuldeep Yadav complaining pain in the left shoulder. With India deciding to play three spinners, Nadeem got a chance to make his debut that too at his home ground in Ranchi. The 30-year-old has been toiling hard in domestic cricket for 15 years as he made his first-class debut way back in December 2004.

The left-arm spinner played as many as 110 first-class matches coming into this Test match. These are the 4th most number of FC games played by any player before their Test debut for India. Dilip Doshi played as many as 123 matches before his Test debut in 1979. The former left-arm spinner had spent five years ahead of his Test debut with the county team Nottinghamshire. It helped Doshi to have vast experience before entering the Test arena.

Dilip bagged 494 FC wickets prior to his debut with help of 23 five-fers. Saba Karim and Naman Ojha are 2nd and 3rd on the list of most FC appearances before Test debut for India. Karim played 117 matches scoring 22 hundreds till his Test debut. He had a batting average of 57 and affected 286 dismissals. Naman Ojha was reasonably close as he scored 19 tons from 112 matches. He was involved in 362 dismissals which include 318 catches prior to his Test debut on 2015 Sri Lanka tour.

Robin Singh and Shute Banerjee are the other two Indians who featured in more than 100 first-class games before their Test debut. None of the Indian players will be in the overall top 50 list for most FC games played prior to Test debut. The overall record is on the name of England’s William Astill who played a whopping 424 first-class matches before his debut in Test cricket. Another England cricketer, Joseph Vine isn’t much behind Astill as he played in a total of 404 FC games before making his first appearance in Test cricket.

Most first-class appearances before Test debut for India: 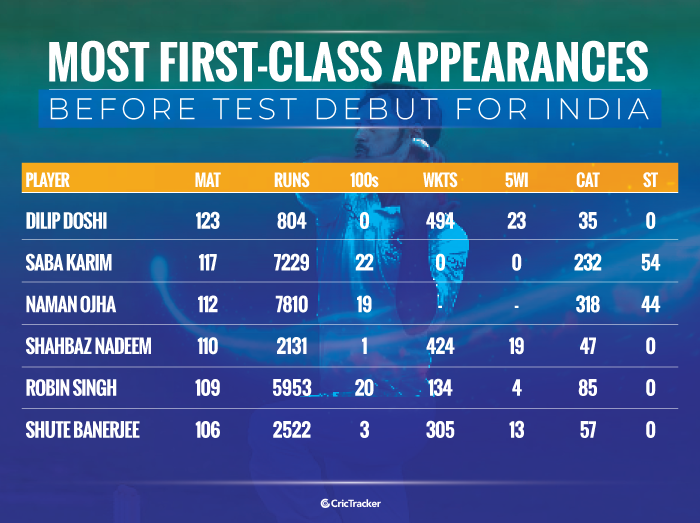