Shai Hope needed 35 runs ahead of the Cuttack ODI for completing 3000 runs in ODIs.

Shai Hope has been a bankable player for the West Indies especially in the ODI format with his consistency in the last couple of years. Though his strike rate is a worrying factor, the fire-power in the West Indies line-up usually covers it up whenever he makes runs. Since he began to open the innings regularly, Shai began to match the Indian batting superstars Virat Kohli and Rohit Sharma who have been topping every possible list in the last 5-6 years. In 17 ODIs as an opener, Shai Hope smashed 1311 runs with six hundreds and 5 fifties.

He averages 109.25 which is the highest for any ODI opener with 1000+ runs. Rohit Sharma is 2nd best with an average of 58.10 but has scored close to 7000 runs. In the ongoing 3rd ODI in Cuttack, the West Indies opener completed 3000 runs in his ODI career when on 35. Hope needed only 67 innings to this milestone; the fewest innings taken by any player from West Indies. The previous fastest West Indian to 3000 ODI runs was Sir Viv Richards who got there in only 69 innings.

Hope was also the quickest to 2000 ODI runs (47 innings) for West Indies bettering Richards (48 innings). Shai is overall the 2nd quickest to 3000 runs in the ODI format. The fastest to 3000 runs is Hashim Amla in 57 innings; ten innings less than what Hope required. Shai Hope pushed Babar Azam to No.3 in this list as the Pakistan batsman completed 3000 ODI runs in 68 innings during the World Cup this year. In terms of matches taken for 3000 ODI runs, Shai Hope is joint 3rd quickest as he played 72 ODIs thus far.

Hashim Amla reached it in only 59 games while Babar came 2nd taking 70 matches. The first two positions in the list of fastest to 3000 ODI runs were taken by West Indies players until Amla came into the scene. Richards held the record completing the milestone in 69 innings while his teammate Gordon Greenidge came 2nd in 72 innings. Shai Hope ended 2019 with 1345 runs which are the 2nd most ODI runs in a calendar year for West Indies behind Brian Lara’s 1349 runs in 1993. 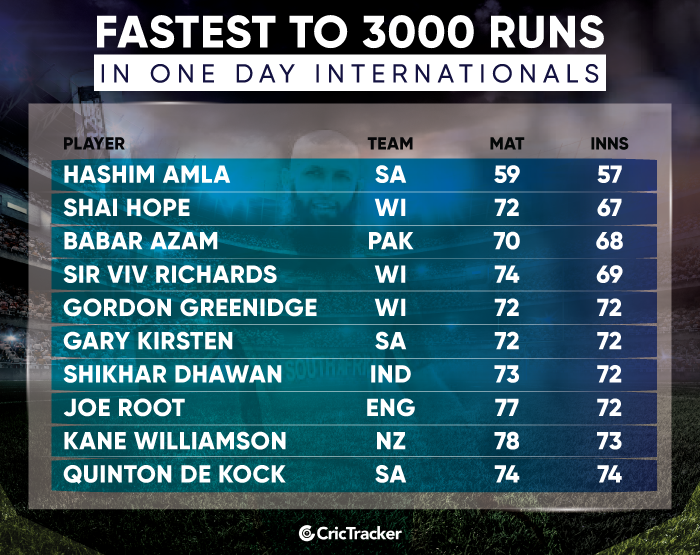