Shikhar Dhawan becomes a different beast altogether when it comes to the ODI tournaments as the Indian opener scored yet another century in this Asia Cup. He began the tournament with a brilliant 127-run knock in the opening game against Hong Kong and then raced through to a couple of good 40s which he failed to convert. The left-hander came into the competition back of failures on the tour of England even in the limited-overs matches where he failed to make it count.

Dhawan ensured he pulled a big one against Pakistan in the crucial Super-Four match to take India into the final of the Asia Cup 2018. Opening the innings alongside the stand-in captain Rohit Sharma, he put on a record stand of 210 runs. The chase of 238 runs was made to look easier with Dhawan taking on the opposition bowlers while Rohit was taking his time at the other end. The pair was set to remain unbeaten if not for a needless stride from Dhawan between the wickets that cost him his wicket.

Before getting out, Shikhar Dhawan struck 16 fours and two sixes on his way to a 100-ball 114. This was his 15th century in the ODI format with seven of them coming in the multination tournaments. The southpaw needed only 108 innings to score 15 tons making him the 2nd quickest Indian and third fastest overall. Hashim Amla firms his position in the fastest to ‘n’ ODI centuries from No. 13 to No. 26. The South African needed only 86 innings to score his 15th hundred in this format.

Virat Kohli stands behind Amla but is separated by 20 innings. The domination of the current generation batsman in this list is visible as the 4th fastest to 15 ODI hundreds took 35 innings more than Dhawan. Former Pakistan opener Saeed Anwar scored his 15th three-figure score in ODIs in the 143rd innings bettering the former Indian captain Sourav Ganguly (144) by one inning.

Fastest to 15 centuries in ODI cricket: 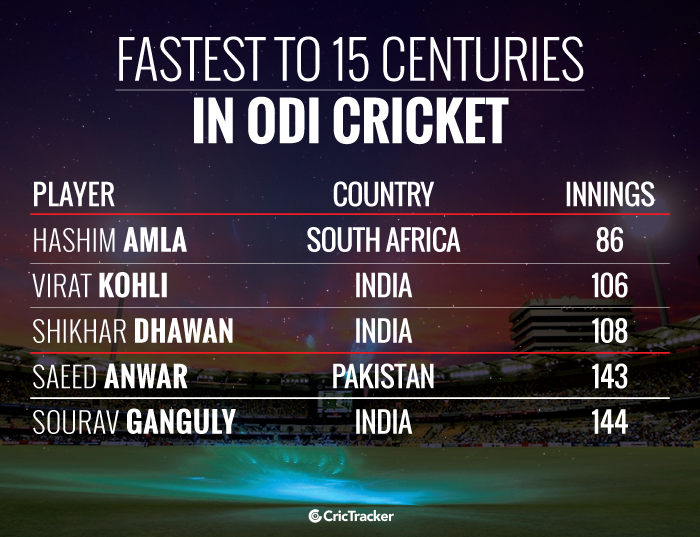