Stats: Teams with most number of titles in a T20 Competition

Stats: Teams with most number of titles in a T20 Competition

Trinbago Knight Riders cruised to their 4th title in eight editions of CPL.

Trinbago Knight Riders crushed the St Lucia Zouks by 8 wickets in the final to clinch the 2020 Caribbean Premier League (CPL). They put on a master-class performance through the tournament winning all the 12 matches played including the ten league phase matches. In this process, TKR became only the 2nd team in the Twenty20 history to have 100% win record during a tournament of ten or more matches. Karnataka, during the Syed Mushtaq Ali Trophy in 2018-19 season, also won each of the 12 matches they played including the final.

This was the 4th CPL title for the Trinidad franchise adding up to the triumphs in 2015, 2017 and 2018 editions. Jamaica Tallawahs and Barbados Tridents won two titles apiece in the CPL. This meant the Trinidad franchise alone won titles in 50% of the editions took place in the CPL. Among T20 competitions with five or more editions, the highest % of title wins came with the Victoria Bushrangers who won two-third tournaments of the Twenty20 Big Bash, the Australia domestic t20 competition.

The Victoria team won four of the six editions before the competition was replaced by the franchise-based Big Bash League. Sialkot Stallions also won half the tournaments they were part of Pakistan’s National T20 Cup. Till date, the National T20 Cup has had 16 editions but the Stallions featured in only 12. The Sialkot side is also one of the two teams in the Twenty20 history to win a competition more than four times. The Titans of South Africa also won six titles of the domestic T20 competition.

The Trinbago Knight Riders (CPL) and Mumbai Indians (IPL) are the only teams with four titles in a franchise-based T20 League. The Auckland Aces are the other team with four titles which they won in the Super Smash, the T20 competition of New Zealand. The Chennai Super Kings have a chance to join this list in the upcoming Indian Premier League (IPL) as they won three of the ten editions played. Perth Scorchers also won three titles of Big Bash League across eight editions.

Teams with most number of titles in T20 Cricket: 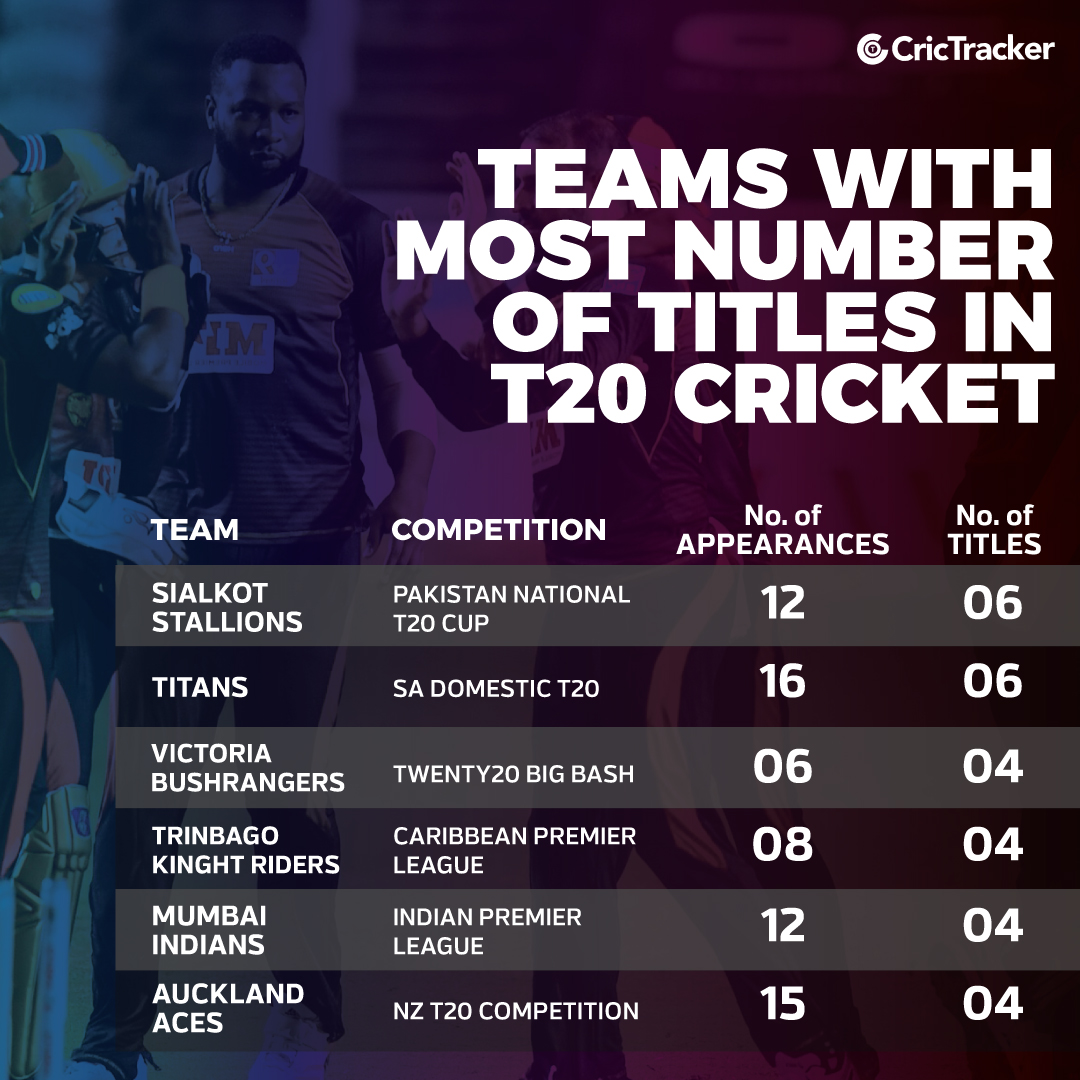