Tom Latham carried the bat with an unbeaten 264 off 489 deliveries with 21 fours and a six.

Tom Latham put New Zealand on top in the first of the two-match home Test series against Sri Lanka with a spectacular double century. After electing to bowl first, New Zealand restricted the visitors to 282. In reply, Latham guided his team towards a big lead with a marathon knock. The hosts, who were cruising at 426/3, bundled out to 578/10 as the Lankan bowlers struck late in the game. The opening batsman stood till the end to hand his team a 294-run first innings lead.

Tom Latham carried the bat with an unbeaten 264 off 489 deliveries with 21 fours and a six. He, thus rewrote the record for the highest individual score while carrying the bat in Test cricket. In this process, Latham broke the record of another left-handed batsman, Alastair Cook who made an unbeaten 244 out of England’s 491 in the 2017 Boxing Day Test match against Australia in Melbourne.

Highest individual scores while carrying the bat in Test cricket: 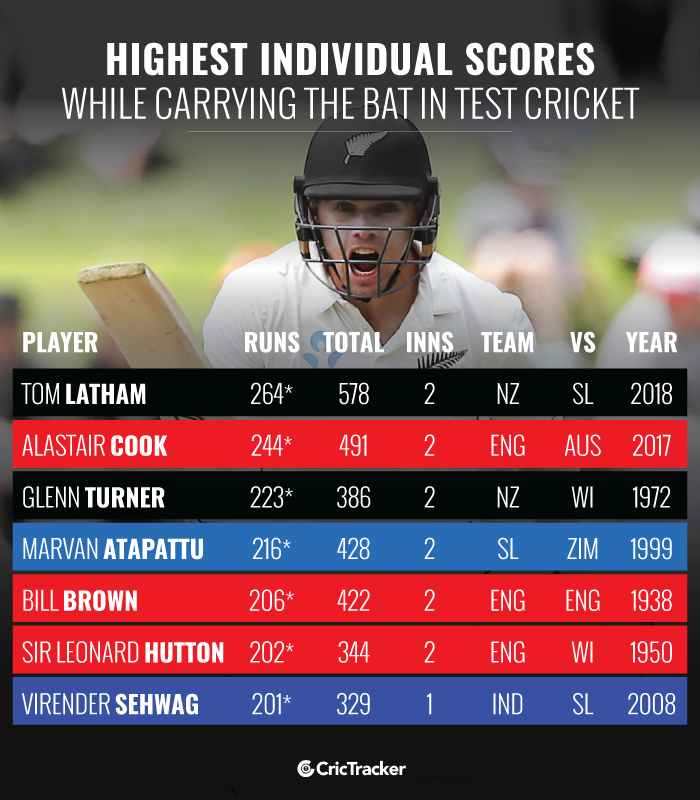 The England opener broke the 45-year-old record at end of 2017 which was owned by the former New Zealand player Glenn Turner who scored 223* carrying the bat in the 1972 Kingston Test against the Windies. Latham ensured a New Zealand batsman got hold of the record by clinching it back from Cook in less than one year. As many as seven players including Latham have scored a double century while carrying the bat. Only Virender Sehwag in the 2008 Galle Test achieved this feat in the first innings of the Test.

This was not the first time where Tom Latham carried the bat for New Zealand. In the 2016 Dharamsala ODI against India, Latham scored an unbeaten 79 while his team was bundled out for only 190. By carrying the bat against the Lankans, the left-handed became only the 5th player to carry the bat in both Tests and ODIs. Chris Gayle has done it in both T20Is and Test cricket once making him one of the six players to carry the bat in two different formats in International cricket.

Players to carry the bat in two different International formats: 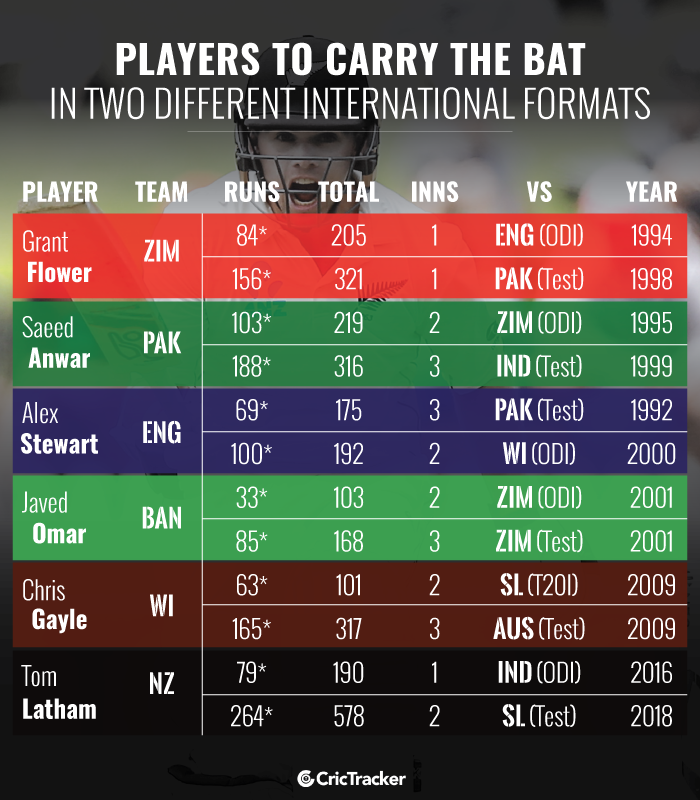