Virat Kohli has limited himself to switching positions for the team’s cause as he batted at No.4 and No.6 this year during the home T20I series against Sri Lanka. He began the ODI series against Australia with the same experiment but returned to his prime position as India were pushed into a must-win situation. However, despite batting down the order, Kohli had enough time to reach few milestones in this year.

1000 T20I runs as skipper and 11000 as captain in International Cricket being the major ones. The Indian skipper became the fastest player to reach both those milestones. He continued his record-breaking spree with another milestone during his half-century in the decider at the Chinnaswamy Stadium. Kohli joined hands with his deputy Rohit Sharma to share a big partnership in the 287-run chase.

Kohli, when on 17, completed 5000 runs in the ODI format while leading the Indian team. He thus became only the 8th captain in the world to aggregate 5000 runs in this format. Kohli is also the 4th Indian skipper with 5000 ODI runs after Mohammad Azharuddin, Sourav Ganguly and MS Dhoni. Virat Kohli reached the milestone in his 82nd inning; by far the fastest to get there.

The previous quickest to 5000 ODI runs as captain was MS Dhoni in 127 innings. This meant Kohli broke the record by 45 innings and needed only 65% innings that the previous fastest required. Ricky Ponting held this record before Dhoni as he needed 131 innings for getting to 5000 ODI runs. Stephen Fleming stands as the slowest captain to 5000 ODI runs as the New Zealand skipper needed 168 innings to get there.

Since becoming the captain, Kohli has been setting new records as he stood as the fastest to ‘n’ runs irrespective of any format. Virat Kohli has clean swept the relevant records in the ODI format as he is already the fastest to 1000 runs (17 innings), 2000 runs (36 innings), 3000 runs (49 innings) and 4000 runs (63 innings) as captain. Towards the end of 2019, Kohli became the quickest to 10000 International runs as captain and also the fastest to 5000 Test runs as skipper.

Fastest to 5000 runs in One-Day Internationals as captain: 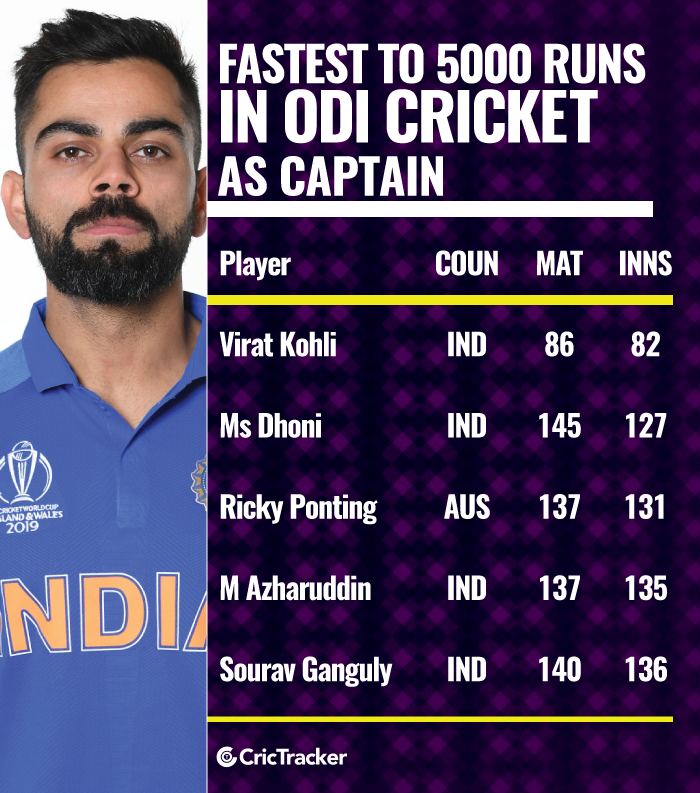