Virat Kohli needed 32 runs for this milestone prior to the Kolkata Test.

The way Virat Kohli has batted over the last three years in Indian colours, one could assume 2019 has been a quiet year for him, especially in the longer format. Kohli scored his career-best of 254 last month against South Africa which was the only Test ton he hit in first ten innings this year. The frequency of big scores from the Indian skipper hardly took a dent in the last three years even while travelling overseas. Kohli also bagged two ducks already in Test cricket this year.

However, Virat Kohli ensured he did not miss out on scoring in the historic day/night Test match that began on Friday at the Eden Gardens. It was the first time that India featured in the D/N Test so were their opponents, Bangladesh. The visitors were bundled out for just 106 after electing to bat first. The Indian openers didn’t score big runs as Kohli walked out to bat at 43/2 in the last session of the opening day. Virat stitched a 96-run partnership with Cheteshwar Pujara for the 3rd wicket.

Virat Kohli completed his fifty in this process and when on 32, he went past 5000 runs in Test cricket while leading the team. He thus became the first Indian skipper to aggregate 5000 Test runs. In fact, no other player has scored even 3500 runs in this format while leading the Indian team. Overall, only five players have completed 5000 Test runs as captain before the Delhi batsman. Kohli is already India’s most successful captain in the longer format with 31 victories.

Virat Kohli reached this milestone in only 86 innings; the fewest needed for any of the six players. The previous fastest was Ricky Ponting in 97 innings. In terms of matches taken to this milestone, Kohli (53) edged past Ponting (54) by one game. None of the remaining four players needed less than 100 innings to reach the milestone. Stephen Fleming remains the slowest as he needed 130 innings. He is currently averaging little over 63 as Test skipper which is by far the best among the Test captains with 5000 runs.

Fastest to 5000 runs in Test cricket as captain: 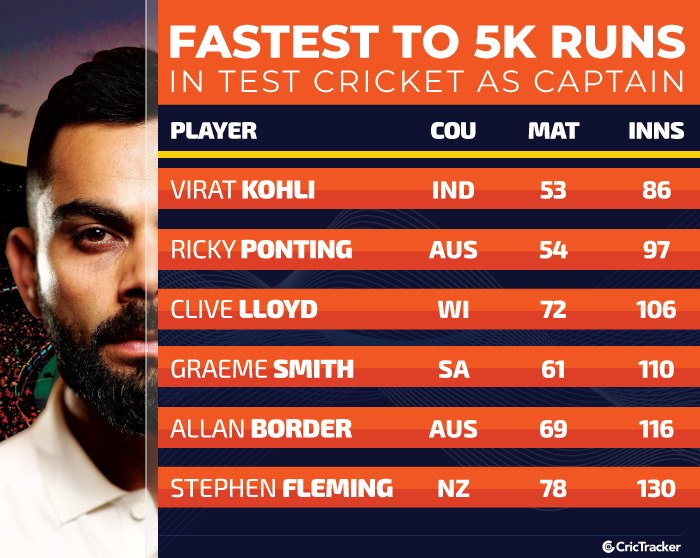