Stats: Virat Kohli completes 5000 runs in Test cricket while batting at No.4

Stats: Virat Kohli completes 5000 runs in Test cricket while batting at No.4

Virat Kohli completed this milestone when he hit a six over the third-man region off Josh Hazlewood.

Virat Kohli stepped up in the batting crisis for India yet again with a brilliant century in the ongoing 2nd Test match against Australia in Perth. Kohli shared fifty-run stands with Cheteshwar Pujara, Ajinkya Rahane and Hanuma Vihari for the 3rd, 4th and 5th wickets respectively to take the team’s total past 250-run mark. He walked to bat at 8/2 and saw his team to 251 before he got out as the sixth wicket.

Kohli batted out 257 deliveries for scoring 123; his 25th century in Test cricket and the 6th in Australia. He struck 13 fours and a six during his long stay before getting out to Pat Cummins for the second time in the series. He edged one to the second slip where Peter Handscomb completed a catch that triggered controversies. On his way to a 123-run knock, Kohli completed 5000 runs in Test cricket while batting at No.4.

The Indian skipper got to the milestone when he hit a six over the third-man region off Josh Hazlewood to reach 111. Virat completed the milestone in only 86 innings and thus became the fastest among the ten players to score 5000 Test runs at No.4. In this process, Kohli broke the record held by Jacques Kallis who needed 87 innings for completing 5000 runs at No.4 position. India’s Sachin Tendulkar now stands third in this list having taken 93 innings.

Quickest to 5000 runs in Test cricket while batting at No.4: 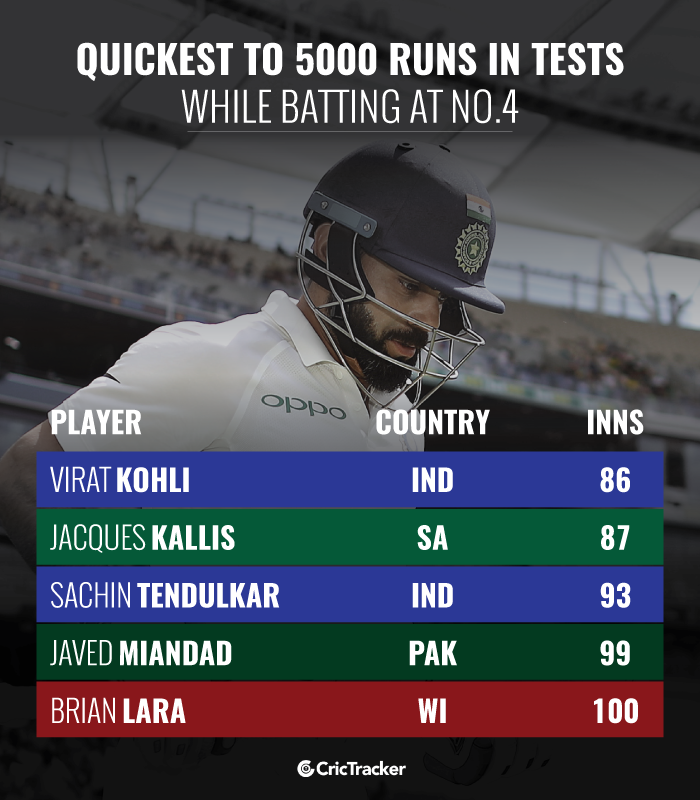 Overall, Virat Kohli is the second fastest player to complete 5000 runs in this format at any particular batting position. The fastest is Sir Donald Bradman who needed only 55 innings for 5000 Test runs at No.3; 31 innings less than what Kohli needed for the same milestone at No.4.

Kallis takes the 3rd spot in this list and Michael Clarke follows him with 90 innings taken for 5000 runs while batting at No.5. No players have scored 5000 Test runs at any batting position lower than No.5.

Quickest to 5000 runs in Test cricket at a batting position: 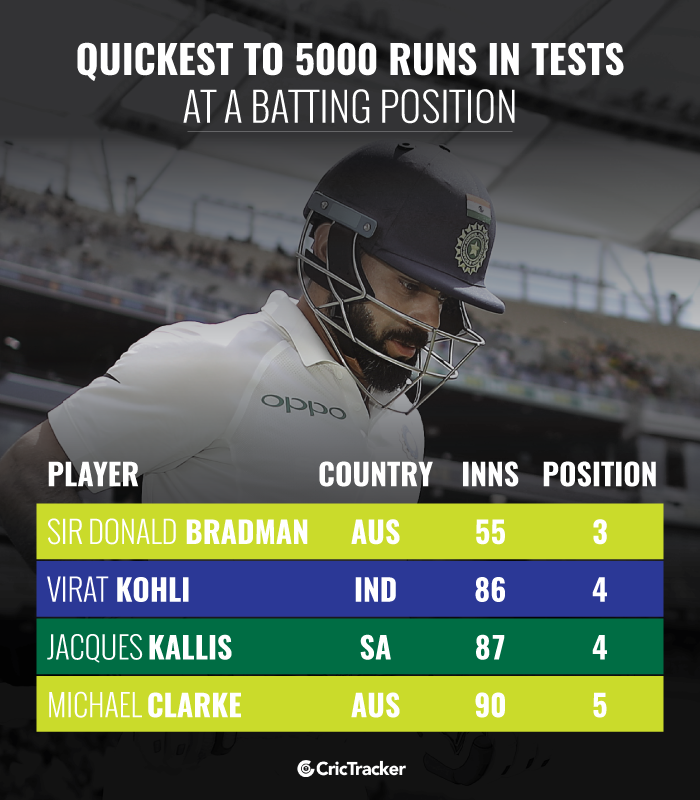