Kohli is stepping out on the field to break records these days.

Virat Kohli strides out on the field to bat only to break records these days. The way he is batting, nothing is impossible for the Indian captain at the moment and is in his zone plundering runs at will. After scoring two consecutive centuries in the ongoing five-match ODI series against the Windies, Kohli walked out to bat in Pune and after scoring only four runs, he became the fastest batsman to complete 6000 ODI runs in Asia.

The Superman from India has redefined consistency in his own way and the other batsmen of his generation can only think about getting there. In Vizag, Kohli shattered records like anything and created some of his own in the sultry heat. His knock of 157* runs kept India in the hunt until the end as Windies almost gunned down the total with the match eventually ending in a tie.

As far as his latest feat is concerned, Virat Kohli completed 6000 runs only 117 innings and 121 matches surpassing the record holder, once again, Sachin Tendulkar comfortably.

Sachin Tendulkar, who is being surpassed by the world’s best cricketer of this generation, had achieved the feat in 142 innings. Kohli’s amazing consistency of scoring runs in almost every match of his career, irrespective of the format, has already been regarded as the Greatest of All Time (G.O.A.T) by many. The 29-year-old deserves all the accolades coming his way and it seems that he will break a plethora of records more by the time he hangs his boots.

A total of 12 players now have managed to amass 6000 runs in the 50-overs format in the Asian continent while Ricky Ponting is the only cricketer to have reached the feat in the Australian continent. Kohli bosses the list comfortably among these 13 players and clearly, nobody is surprised this time around. Expect that modern-day legend to scale more unimaginable heights in the near future.

Fastest to 6000 ODI runs in a continent 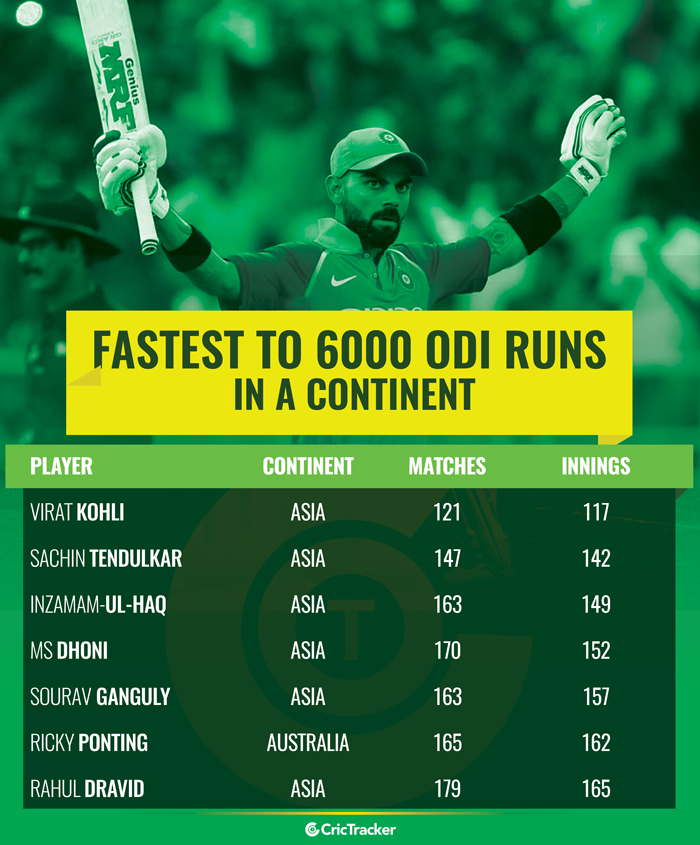