Virat Kohli was in the news on the first day of the much-awaited five-match Test series between England and India due to his celebration after Joe Root’s dismissal. Kohli mocked Root’s bat drop celebrations during the 3rd ODI in Headingley where he scored an unbeaten 100 to take his team to a series win. The Indian captain ensured his on-field antics didn’t overshadow his game as he is trying his best to get his team out of troubles with the bat.

After restricting England to 287, India began their reply with a fifty-run opening partnership. However, Sam Curran dismissed their top three in the space of eight deliveries to push the visitors on the back foot. Ben Stokes also chipped in with two wickets to reduce India to 100/5. Kohli got to his highest Test score in England with the half century surviving some good bowling spells from all the pacers. He also completed 7000 International runs as captain when he reached 42 with a boundary against Stuart Broad.

Thus, Kohli became the fastest to reach the milestone taking only 124 innings and 105 matches. Brian Lara was the fastest among the previous 14 players who scored 7000 International runs as captain. The West Indian captain needed 164 innings for the milestone, 40 more than what Kohli needed. The former Australian captains Ricky Ponting and Michael Clarke aren’t any behind Lara as they needed 165 and 166 innings respectively for the milestone.

Kohli is the 4th Indian after Mohammad Azharuddin, Sourav Ganguly and MS Dhoni to complete 7000 runs as captain in International cricket. However, the trio is placed in the bottom five as the slowest to reach the millstone. Stephen Fleming and Arjuna Ranatunga took 224 and 222 innings respectively to get there while Azharuddin, Ganguly and Dhoni needed 193, 194 and 198 innings respectively. 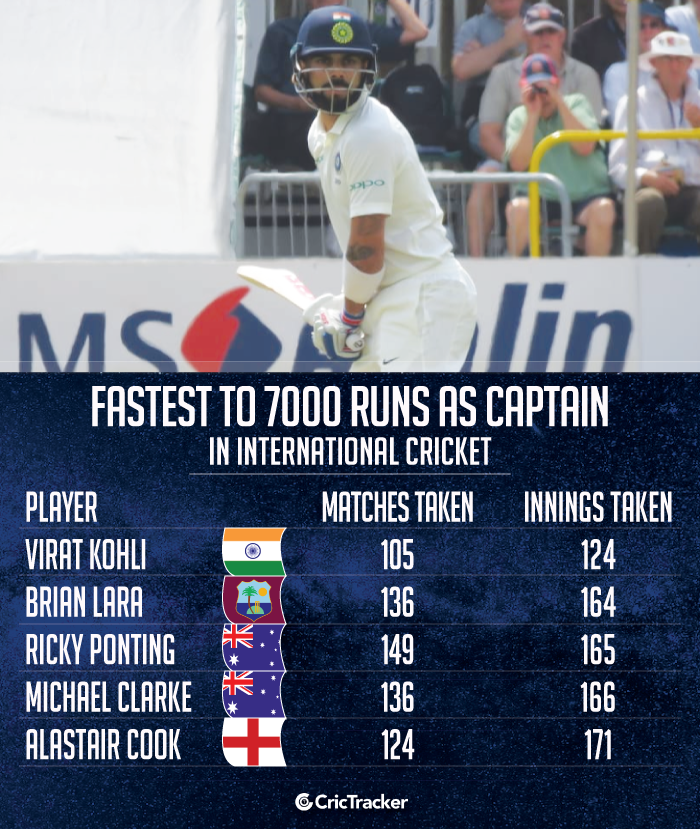