When on 22, Virat reached the milestone and became only the 6th player in the history to score over 9000 runs as captain in Internationals

Virat Kohli has brought himself into a position where he smashes at least one record in every game he turns up in Indian colours. His impeccable run with the bat and dominating career as a captain has handed him many accomplishments already and few more are just around the corner. His consistency got better across all formats since 2016 and has set an example leading them from the front from the moment he became India’s all-format skipper at the start of 2017.

On Tuesday, Kohli completed 9000 runs in International cricket as captain during the 2nd of the 5-match ODI series against Australia. India were put into bat after losing the toss in the game being played at the VCA Stadium in Nagpur. India lost their opener and the vice-captain Rohit Sharma for a duck in the very first over. On what is supposed to be a tricky track, Kohli looked comfortable and kept his score moving along like any other day.

When on 22, Virat reached the milestone and became only the 6th player in the history to score over 9000 runs as captain in International cricket. He is the 2nd player to achieve this feat from India only after MS Dhoni. Virat Kohli required 159 innings for the milestone making him the only player who took less than 200 innings to get there. Among the previous five players to score 9000 International runs as captain, Ricky Ponting was the quickest taking 204 innings.

Earlier, Virat became the fastest to 4000, 5000, 6000, 7000 and 8000 runs in International cricket as captain having taken 73, 93, 106, 124 and 137 innings respectively. The 44 innings difference between him and Ponting explains the level on which Kohli has been batting as captain. Prior to Virat, the quickest to 7000 runs as captain in International cricket was Brian Lara in 164 innings. Kohli got to 9000 runs in 159 innings which meant the Indian captain scored 2000 runs more than Lara despite playing 5 innings fewer at a point.

Quickest to 9000 runs as captain in International cricket: 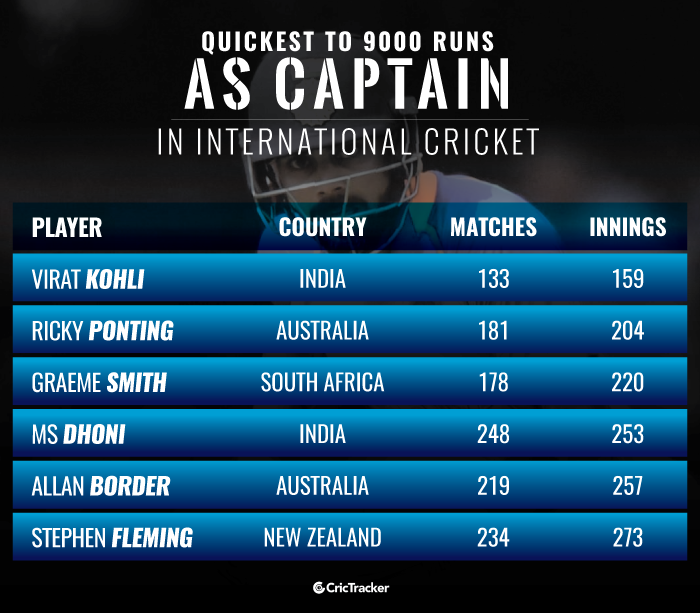