Here are the major stats and records created by Victoria’s opening pair against South Australia.

The Victorian opening pair of Will Pucovski and Marcus Harris rewrote Sheffield Shield’s record books with their record-breaking partnership over the weekend. In the match against South Australia in Geelong, the duo put on 486 for the first wicket after the opposition bowled out for only 200 in the first inning.

On the second day of the game, the Victorian pair added 380 runs without being dismissed before creating records on the 3rd day morning. Harris fell at his individual score of 239 while Pucovski, opening for the first time in FC cricket, finished with an unbeaten 255 as Victoria declared their innings at 564/3.

Here are the major stats and records created by Victoria’s opening pair against South Australia:

1 – Will Pucovski (255*) and Marcus Harris (239) became the first opening pair in the history of Sheffield Shield to score double centuries. The Victoria’s opening pair of Edgar Mayne and Bill Ponsford scored 209 and 248 respectively in the 1923-24 season against Queensland but it was a first-class game played outside of Sheffield Shield.

14 – Pucovski also became the 14th player in first-class cricket to sleep on 199* as he was unbeaten on 199 at stumps on day two. All those 14 players including Pucovski went on to score their 200th run on the following day. The last of the previous 13 players to sleep on 199* in FC cricket was Shubman Gill during the 2018-19 Ranji Trophy. 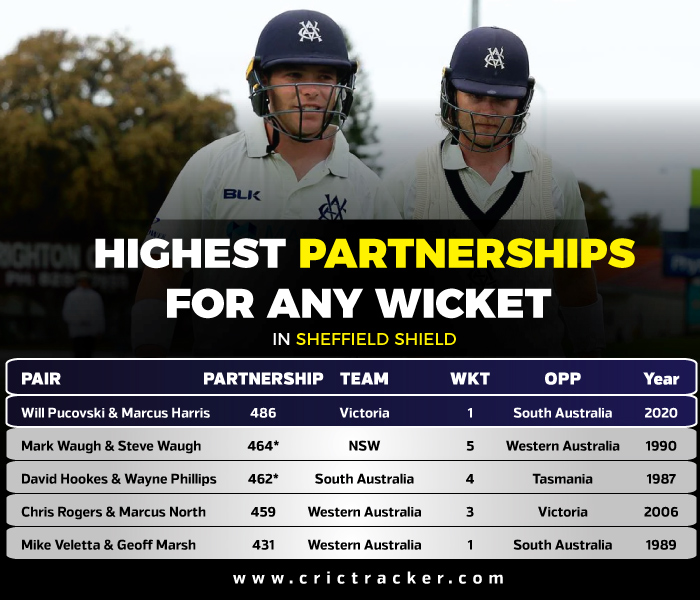 486 – The opening stand of 486 between Will Pucovski and Marcus Harris is now the highest for any wicket in the history of Sheffield Shield. The pair broke the record held by Waugh twins (Mark and Steve) with their unbeaten 464-run stand for New South Wales in 1990. The Waugh brothers recorded the 464-run partnership for the 5th wicket against Western Australia.

486 – The 486-run stand by Pucovski-Harris pair is also the 6th highest opening stand in the history of first-class cricket and the 2nd highest FC partnership on Australian soil for the first wicket. The pair of Ryan Carters and Aaron Finch added 503 for Cricket Australia XI in 2015 against the tour New Zealanders. 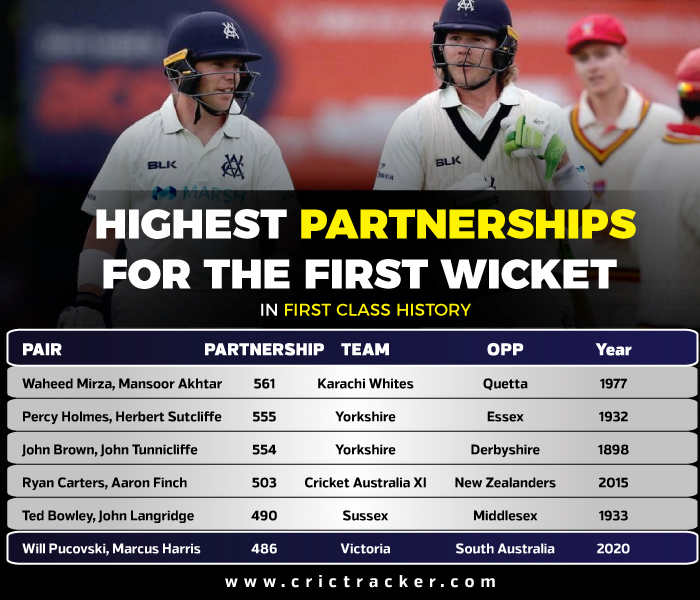