Both teams have stayed with an unchanged squad.

Perth Scorchers have had a horrendous run in the ongoing edition of the BBL. Having lost three games out of four, winning none, the team are languishing right down the bottom of the points table with two points. Their net run rate of -1.805 hasn’t helped their cause by any means.

Their next match is against the Adelaide Strikers on New Year’s Eve on Thursday, at the iconic Adelaide Oval. Interestingly, at the same venue, a couple of days ago, the Ashton Turner-captained Scorchers went down to the Strikers by 71 runs.

The Strikers, on the other hand, are sitting pretty at the third spot in the table. Winning their last two matches, Alex Carey and Co are slowly, but surely, climbing the ladder. Ahead of the match on December 31, both teams have announced unchanged squads.

The pitch in Adelaide has been a decent one for batting over the time period. Batting first should be the way forward for both teams as the track might slow down in the second half.

The playing conditions will be mostly clear with the sun around. The temperature will be around 24 degrees Celsius throughout the duration of the match. The humidity will mostly be in the high-30s.

Playing Combinations for STR vs SCO

Phillip Salt has given the Strikers fast starts on a number of instances. In five matches, the opening batsman has notched 118 runs at an average and strike-rate of 23.60 and 137.20 respectively.

The half-century he got against the Scorchers in the last game at the same venue should be keeping him in good stead. Salt is known for his power-hitting and he will be keen to replicate something similar.

Jason Roy prefers to take the opposition bowling by the scruff of its neck with his wide array to stroke-play. In his first appearance against the Strikers, the England batter started off in a blistering fashion, scoring 21 runs off only 11 balls at a strike-rate of 190.90.

He fell prey to Daniel Worrall after which the Scorchers’ innings collapse. He will be looking to get a substantial score under his belt. 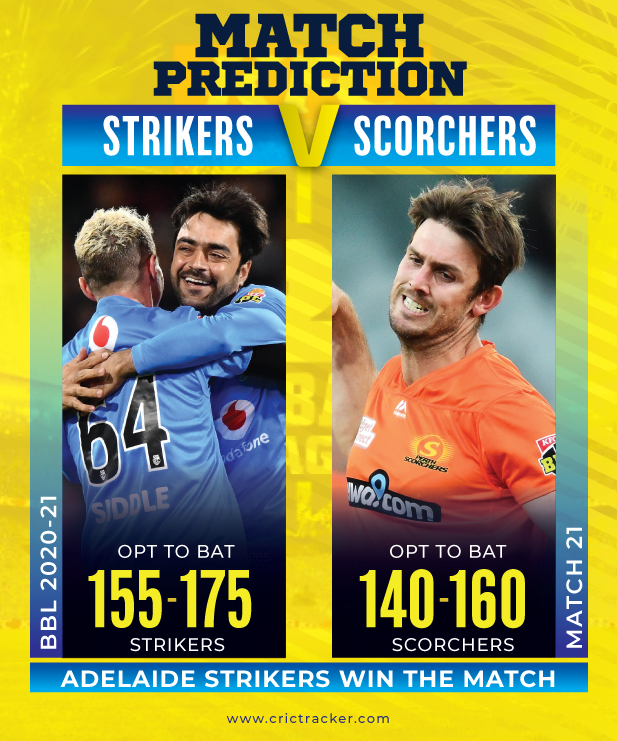