Tim Seifert is in red hot form with the bat, who has scored 218 runs in his six games with two half-centuries.

The 22nd match of the Super Smash 2019-20 will be played between Canterbury and Northern Knights at the Hagley Oval in Christchurch.

Canterbury has been struggling in the ongoing tournament as they have won just one game out of their last five games. Either they have to buck up or soon they will be ruled out of the contention to qualify for the semi-finals. The high profile players in their team are currently struggling with poor form, who need to regain their form before its too late. In batting, Chad Bowes and Jack Boyle helped their side in getting off to a good start but their bowlers failed to restrict the opponents. However, in the next game, they need to come with some impressive performances.

Northern Knights are also not in a good position in the league table and are ranked fifth. For them, the trio of Anton Devcich, Tim Seifert and Dean Brownlie will have to play good knocks with the bat. Otherwise, their chances to win the game against Canterbury are quite slim. However, their bowling unit has so far done a good job and the same would be expected from them in their first game for the year 2020.

The wind is expected to blow at a rate of 11km/hr during the match time with no chances of rain. However, the temperature is expected to deviate between 8 and 24 Degree Celsius throughout the day according to Accuweather.

The track at the Hagley Oval has so far gone into the favour of the bowlers and the batsmen have found it difficult to play their defining strokes against the bowling spearheads. The batters have to get settled on the wicket before they take charge against bowlers. Also, the side winning the toss will look to bowl first to take advantage of the bowling friendly conditions at the start of the match.

Average first innings score: 129 (In one game played at this venue in this season of Super Smash)

Canterbury and Northern Knights have announced unchanged squads for their first game of the year 2020.

Tim Seifert is in red hot form with the bat, who has scored 218 runs in his six games with two half-centuries. He would be a decent pick for any Dream11 Fantasy. Chad Bowes and Jack Boyle also played some brilliant knocks in their previous games and might click another in the next. The duo will also play a vital role in any fantasy side. Brett Randell has taken 9 wickets in his last five games and is a player to watch out in the next match. 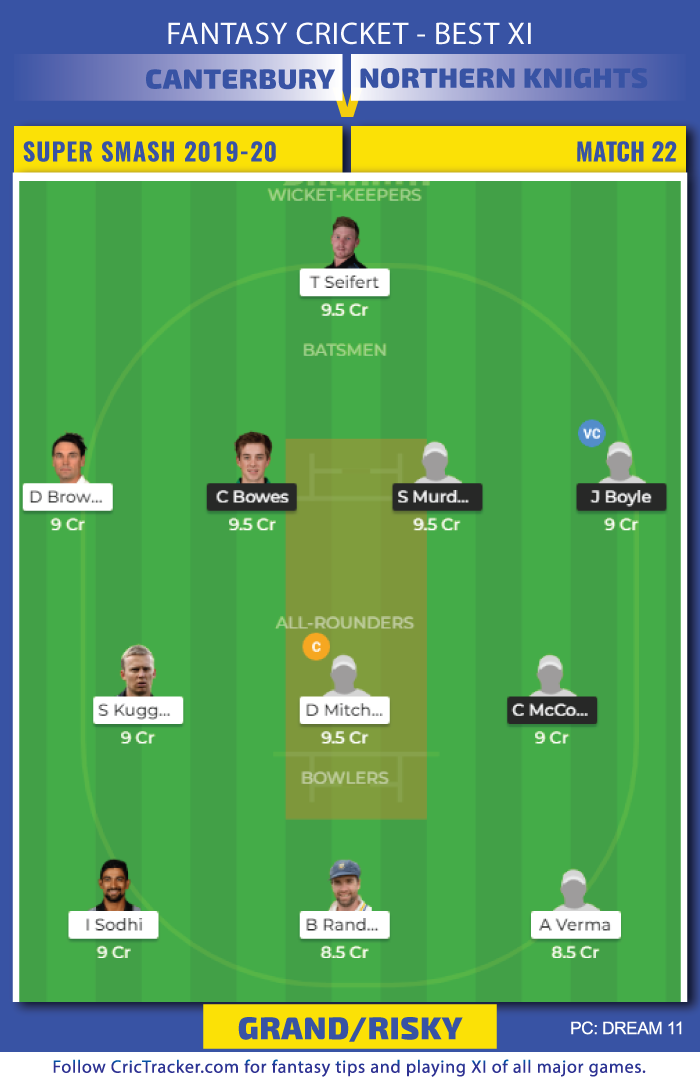 Stephen Murdoch is a brilliant batsman but he has struggled so far in Super Smash 2019-20. However, he would be eager to click a good knock with the bat in the next game and regain some form with the bat. He could be a risky pick but will be worth for any Grand League Side.

Northern Knights are expected to win this match against Canterbury.