Otago Volts are expected to get the better of Central Stages despite their recent record against the team.

The Central Stags and Otago Volts will face off in the reverse fixture at the McLean Park in Napier after Otago’s home fixture in Dunedin was washed out even without a toss. The Volts started with consecutive wins before losing to the Northern Knights while the Stags lost their previous two matches after starting the campaign with a win over the Knights. The Otago side has retained the squad with Ben Raine and Brad Wilson in the place of Neil Broom and Christi Viljoen.

Ajaz Patel is expected to make his appearance in this game after being brought into the squad ahead of the Sunday’s fixture in place of Felix Murray. The Stags brought back Christian Leopard who they dropped from the squad last week. The Stags have a brilliant recent record against the Otago Volts whom they defeated on four occasions in their previous five completed Twenty20s and lost another game by a one-run margin.

The 14th match of the Super Smash T20 2018-19 will be played between Central Stags and Otago Volts at the McLean Park in Napier.

The McLean Park in Napier has hosted only one T20 game since the start of 2017. It stood as the host for the T20I between New Zealand and Bangladesh which the home team won comfortably chasing 140+ with six wickets and two overs to spare. The game between the Stags and Volts can witness 160+ scores.

Matthew Bacon will want to make it count having gone wicketless in the three overs he bowled in his first game of the season. Bacon was on the bench for the first two matches. He claimed nine wickets from four games in the previous season including two four-wicket hauls.

George Worker and Anaru Kitchen have to be the first considered multiplier options. Hamish Rutherford and Tom Bruce will be key for their respective teams and are ideal for the multipliers among the batsmen. One of the pacers Seth Rance and Jacob Duffy can be picked up as the vice-captain. 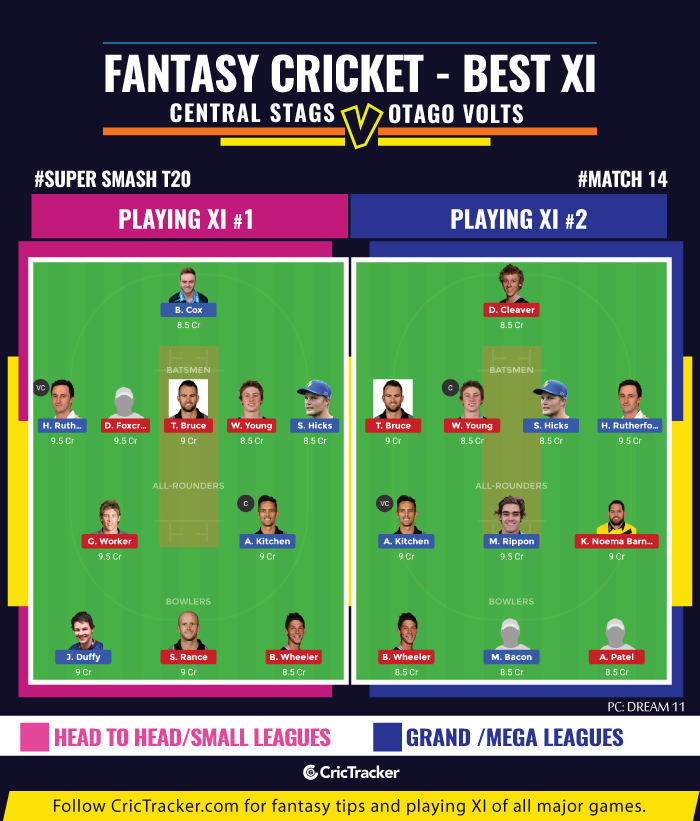 Picking players from the batsmen category might be tough given no one other than Rutherford and Bruce have been consistent. The likes of Shawn Hicks and Will Young can be the other options to be considered for selection.

Otago Volts are expected to get the better of Central Stages despite their recent record against the team.