Wellington Firebirds will start as favourites as the Northern Knights will be missing some of their big players.

The defending champions Northern Knights will be facing Wellington Firebirds in the reverse fixture who they faced in the tournament opener. After a big defeat in that game, Firebirds succumbed to a 1-run defeat against Otago Volts. They went on to win their next two games and are placed at No.2 in the points table. The Knights are going well at the moment with four wins from five matches but will be missing a couple of big players against the Firebirds.

Scott Kuggeleijn was a part of New Zealand’s T20I squad against Sri Lanka while Anton Devcich and Chris Jordan will join the Sydney Thunder squad. The three places will be filled by Joe Carter, Nick Kelly and South African International Kyle Abbott. The Wellington too had a couple of changes as Troy Johnson and Iain Mcpeake have been added to increase their squad strength from 12 to 13 with Malcolm Nofal going out from the squad that played against the Canterbury Kings.

The 15th match of the Super Smash T20 2018-19 will be played between Wellington Firebirds and Northern Knights at the Basin Reserve in Wellington.

The game hosted by Basin Reserve last week witnessed the hosts making 200 and bundling out the opponent to just 135. The teams batting first have posted over 170+ only once in the five completed Twenty20s at this venue before this tournament. The Central Stags, who made 194 batting first against hosts last year, won by a 29-run margin. In the other four matches, the chasing side Wellington won two and lost twice. Both those defeats came by a 1-run margin.

Michael Bracewell has turned the things well for the Firebirds with a hat-trick of fifties. After scoring only six runs in the first game, Bracewell bounced back by scoring 60, 74, and 69 in next three games. The opening batsman could well join the elite list of New Zealand players with four consecutive T20 fifties. Martin Guptill and Kane Williamson are others to be part of this list.

Daryl Mitchell and Michael Bracewell will be first preferred for the multiplier options given their form in this season. The batsmen in form of Adam Hose and Devon Conway can be considered as alternatives. Among the bowlers, Hamish Bennett and Logan van Beek can be picked as vice-captain. 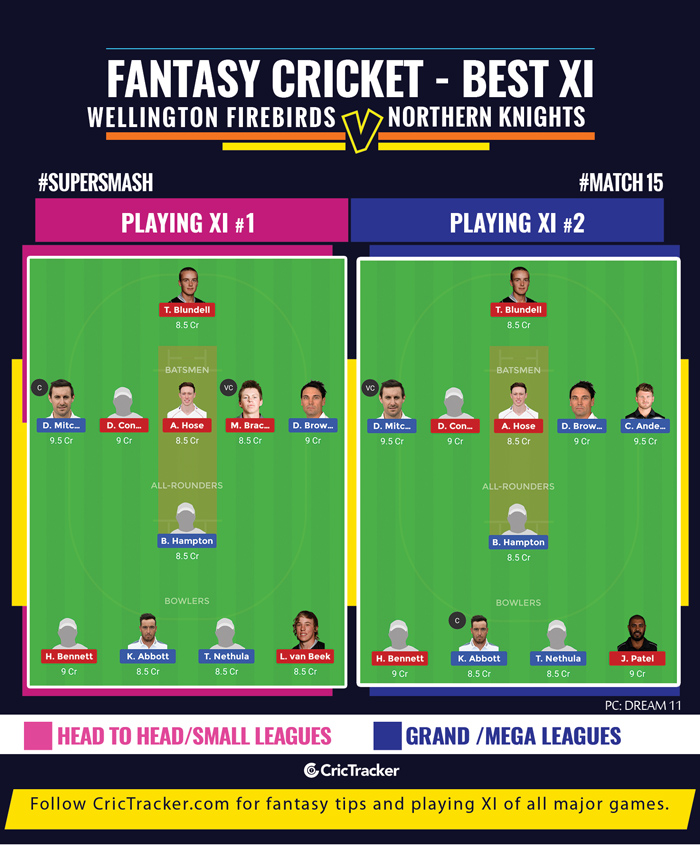 With quite a few changes made by both the teams for this game, it will be better to pick the players who are sure of making the playing XI. In other words, picking players who have played previous matches will be the best option.

Wellington Firebirds will start as favourites as the Northern Knights will be missing some of their big players.