Who will replace Ish Sodhi, Mitchell Santner and Doug Bracewell in the Super Smash T20?

Northern Knights and Central Stags, the top two teams of the Super Smash T20 2018/19, will face off in reverse fixture at the McLean Park in Napier. The defending champions Northern Knights have won six of the seven matches they played thus far. Their only defeat came in the away game against the Central Stags only. The Tom Bruce-led side caught up a winning streak after winning only one of their first four matches.

Will Young coming into the form is a big plus for the Stags who have Bruce and Dean Foxcroft performing consistently. They have been deadly at their home venue Napier by posting 200+ totals. This venue will be hosting the third match in three straight days as it hosted the ODI matches of India’s Men and Women teams on Wednesday and Thursday. The sunlight halted the play during the Men’s ODI while the clouds put that away during the Women’s game.

The 22nd match of the Super Smash T20 2018-19 will be played between Central Stags and Northern Knights at the McLean Park in Napier.

The McLean Park in Napier will be hosting the third match in as many days. However, the pitch used for the Blackcaps and White Ferns’ ODIs in the past two days is different from the game. The last two matches played on this pitch used for Super Smash produced 200+ totals and could be in for another high scoring game.

Mitchell Santner, Ish Sodhi and Doug Bracewell miss out due to the ongoing home ODI series against India.

Corey Anderson gained some momentum over the last two matches with both bat and ball. He started the season with scores of 4, 4, 17 and 4. He bowled for the first time against the Firebirds and recorded figures of 2/22. In the last game against Canterbury, Anderson struck 38 with four sixes and took two wickets.

Will Young and Tom Bruce cannot be overlooked for the multiplier roles given their performances in recent matches. Daryl Mitchell and Tim Seifert will be worthy picks as captain or vice-captain. Alternatives – Dean Brownlie and George Worker. 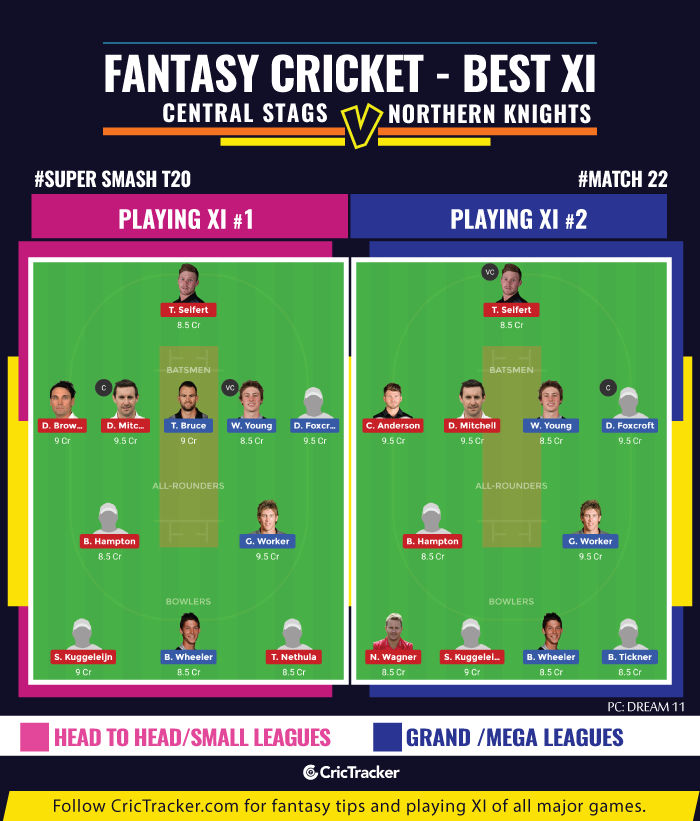 It might not be a good decision to pick players who have been in and out of the team for a while now. The regular players are assured of performances and taking a gamble by picking others might not work especially in this game.

The Central Stags are expected to extend their winning run to four by ending a 5-match streak of Northern Knights.