What are the chances of Jimmy Neesham, Doug Bracewell and Will Young featuring in the playing XI?

Central Stags and Wellington Firebirds face off in a crucial match whose result to turn the table upside down for as many as five teams. The Stags are currently placed at third with four wins from eight matches. The Firebirds, on the other hand, have one win less than the Stags in the same number of matches. The Wellington team could move up to 3rd if they defeat the inform Central Stags with a better NRR.

All the Central Stags needed here is a win. From the remaining two matches, the Stags needed at least one win that could seal their position in the final three. They will be boosted by the inclusion of Doug Bracewell who has been left out of the ODI squad against India. At the same time, Firebirds miss Jimmy Neesham in this do-or-die fixture.

The 25th match of the Super Smash T20 2018-19 will be played between Wellington Firebirds and Auckland Aces at the Basin Reserve in Wellington.

Basin Reserve is a perfect venue for the T20 format with the track getting better as the game progress. The venue either produces high scoring ones or the low scoring matches in general.

Jimmy Neesham joined the New Zealand squad and misses this game. Doug Bracewell has been released from the squad for the last two ODIs and is available for Central Stags.

Rachin Ravindra during the 2018 U19 CWC at home got famous for his name which is a combination of Sachin Tendulkar and Rahul Dravid. He hogged the limelight with consistent performances with both bat and ball. The all-rounder got off to a good start in his T20 career by picking 3/32 on debut.

The inform batsmen Will Young, Michael Bracewell, Devon Conway, Tom Bruce and Dean Foxcroft all are worthy enough to be picked as captain or vice-captain for this game. Among the all-rounders, Doug Bracewell and Rachin Ravindra could make a difference for their teams. 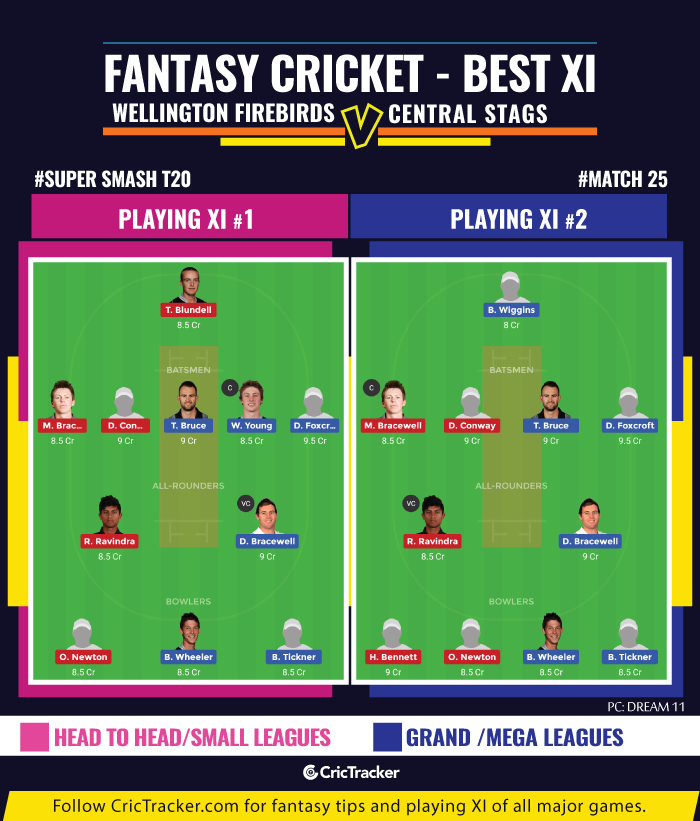 Quite a few skilled batsmen are a part of both the teams making it tough to choose from the batsmen’s category. Bracewell, Young, Foxcroft, Bruce and Conway have to be the first picks from the category given their batting position.

Central Stags will start as favourites against the Wellington Firebirds given their recent form.