Darren Bravo will be an important player for Trinidad & Tobago.

The 24th match of the Super50 Cup 2019-20 in the Group B will be played between Trinidad & Tobago and Windward Islands at the Brian Lara Stadium in Trinidad.

Trinidad & Tobago is ranked 2nd in group B and has won three out of their four games. Their top-order batsman Darren Bravo is in red hot form with the bat and has amassed 211 runs in 4 innings and is on third in the list of leading scorers in the tournament.

His form is the biggest positive for Imran Khan and Co. In the previous game, their all-rounder, Jason Mohammed also looked in full flow and scored his first ton in Super 50 Cup. If they continue to replicate their form in the next game then there is a big chance that they might move up to the 1st position in the league table.

The Windward Islands so far have struggled against every team. They have won only one game until now and if they want to qualify in the further stage of the competition, they will soon need to fill all the voids in the team and come back stronger against Trinidad. Also, the bowlers of Windward needs to complement the effort of batsmen during the match.

The match might get abandoned due to the chances of rain according to the Accuweather. However, the temperature is expected to remain between 23 to 31 Degrees celsius.

The track of Brian Lara Stadium is on a slower side because of which teams are finding it difficult to chase the targets. The team winning the toss will look to bat first and a total of 250+ will be a tough task for the opposition in order outclass the score in the second innings of the game.

Average 1st inning score: 204 (Matches played on this ground in Super Cup 50 in this season)

Darren Bravo’s form in Super 50 Cup in this season makes him a perfect pick in Dream11 Fantasy side. He is currently having an average of 105.6 in the tournament.

Also, Devon Smith, the opener of Windward showed some signs of coming back into the form as he played a brilliant knock of 93 runs against Guyana. He will also be an important player to watch out in the game against Trinidad. 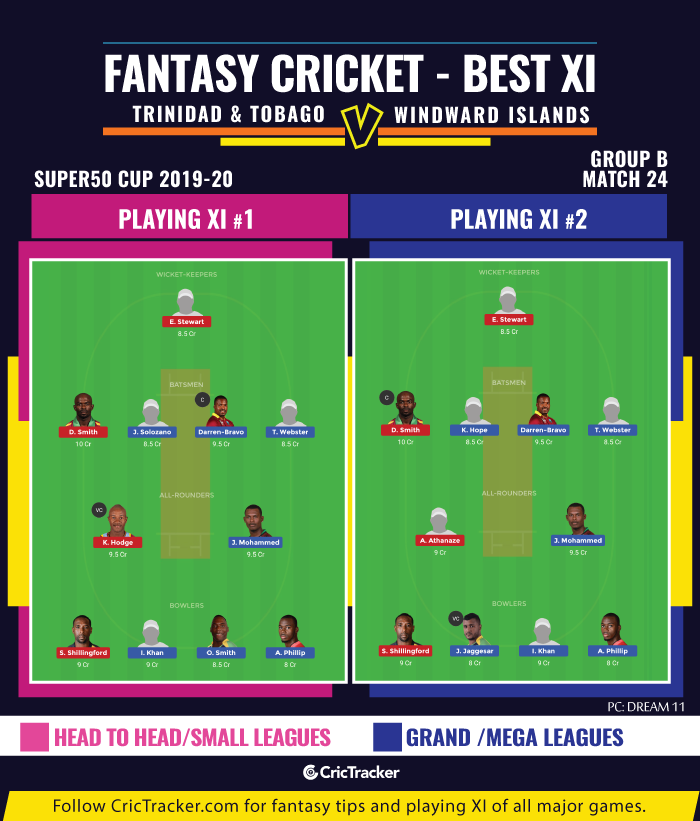 Jason Mohammed’s brilliant knock of 101 runs in the previous game against the United States of America makes him a vital pick in the game against Trinidad & Tobago. However, he lacks in giving consistent performances, but his ability to contribute with the bat and ball for the team makes him a worthy pick for any Grand League side.

The Trinidad and Tobago are expected to record their 4th win of this competition.