Karnataka's top-order has been the cornerstone of its success in recent times.

The Group A, Round 02 match of the 2019-20 Syed Mushtaq Ali Trophy will be played between Karnataka and Baroda at Dr Y.S. Rajasekhara Reddy ACA-VDCA Cricket Stadium, Visakhapatnam.

So, after the Vijay-Hazare Trophy, the country’s premier domestic T20 tournament has taken centre stage and its caravan will move to Visakhapatnam on Saturday where defending champions Karnataka will take on Baroda in what should be another riveting encounter.

The defending champions and the winners of the recently concluded Vijay-Hazare Trophy continued with their winning streak in T20 cricket courtesy a clinical nine-wicket win over Uttarakhand, proving they are not overly dependent on the senior Indian International duo of KL Rahul and Manish Pandey, both of whom are on International duty.

In the absence of Rahul and regular skipper Manish Pandey, Rohan Kadam (67*)- the leading run-scorer (536) of the last season- and Devdutt Padikkal (53*) who finished as the top run-getter in the Vijay Hazare Trophy took up the mantle in guiding their team home. This was, of course, after a disciplined bowling effort-led by Abhimanyu Mithun (2-20) and Shreyas Gopal (2-20)- restricted Uttarakhand to an underwhelming 6-132.

They’ll now face Baroda, who will be looking to get their campaign back on track after a loss in their opening encounter to Goa. Baroda started their campaign against Goa on Friday where, on batting first, they managed 9-149 after 20 overs thanks largely to Swapnil Singh’s half-century and his crucial stands with Deepak Hooda (34) and Vishnu Solanki (25), which sadly did not prove to be enough as Goa- thanks to an unbeaten 60 by Suyash Prabhudessai.

While it is expected to be a day of occasional showers, the good thing is they are predicted for the latter stage of the day. It is expected to be bright and sunny between 09:00 AM up until 04:00 clock in the evening with the temperatures hovering between 23-31 degrees celsius.

While the sample size may be small (just two T20I have been played at the venue), it has generally been a slow and sluggish wicket to bat at Vizag. But, one thing that we should bore in mind is that both of those games were night fixtures, and with tomorrow’s fixture being an early 09:00 AM start, the ball should come onto the bat and we can expect a good high-scoring fixture.

KL Rahul and Manish Pandey are unavailable for Karnataka with Bangladesh T20Is going on.

Krunal Pandya is unavailable for Baroda for the same reason.

Karnataka– Rohan Kadam (67*) and Devdutt Padikkal (53*) have been in pristine form and will once again be the key to Karnataka’s fortune. With the bowl, Abhimanyu Mithun (2-20 and Shreyas Gopal (2-20) were the spearheads in the last game.

Baroda– Once again the duo of Swapnil Singh (50) and Deepak Hooda (34) will be key in the middle-overs. However, they would hope that the openers in Kedar Devdhar and Aditya Waghmode come good in the next game. Lukman Meriwala and Atit Seth will lead the bowling attack. These players should be picked in your Dream11 Fantasy team. 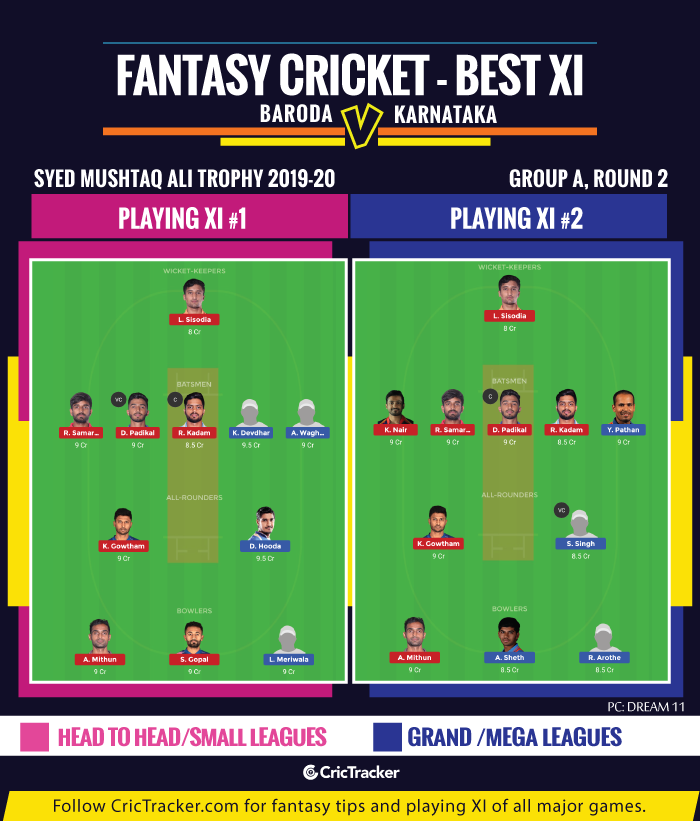 Karnataka’s top-order has been the cornerstone of its success in recent times. Thus, opting for the likes of Kadam or Padikkal as captain/vice-captain in your Dream11 Fantasy can reap you great rewards.

Karnataka is expected to win the match.