Ishan Kishan will be an important player to watch against Gujarat.

The Round 7 match in the Group E of the Syed Mushtaq Ali Trophy 2019-20 will be played between Gujarat and Jharkhand at the Lalabhai Contractor Stadium in Surat.

Gujarat team have regained the momentum by winning back to back three matches in the tournament. In the previous game, they outclassed Odisha as their bowlers jointly gave some brilliant performance. Roosh Kalaria took three wickets and was well partnered by the senior spinner of the team Piyush Chawla, who also dismissed three batsmen.

However, their skipper Parthiv Patel couldn’t perform well and got out after scoring three runs. He would be looking to come up with good performance in the game against Jharkhand. They are currently ranked 2nd with 16 points and have a brilliant chance to defeat the league toppers and grab the first position in the points table.

Jharkhand’s winning streak came to an end in the previous game against Delhi. It will be an important game for them in order to consolidate their position in the points table. Their middle-order with the likes of Saurabh Tiwary, Kumar Deobrat and Anukul Roy is doing well but their openers are still due to give some game-changing performance in the tournament.

On the match day, the sun will be outright shining on the heads of the players. There are no chances of rain as per Accuweather. And, the temperature is expected to deviate between 25 and 35 degrees celsius.

The track is expected to be a sporting one and it will be high scoring match. In the games played at Lalabhai Contractor Stadium, on as many as two occasions teams were successful in posting a mammoth total against the opposition. However, in the second half of the match, the pitch starts assisting pacers in getting some swing.

Virat Singh has looked pretty impressive with the bat for Jharkhand and has amassed 182 runs in 5 games which makes him an important candidate for any Dream11 Fantasy side.

Roosh Kalaria has been taking wickets in every encounter and has turned out to be the spearhead of Gujarat’s bowling in this season. He has scalped 8 wickets in his four games. 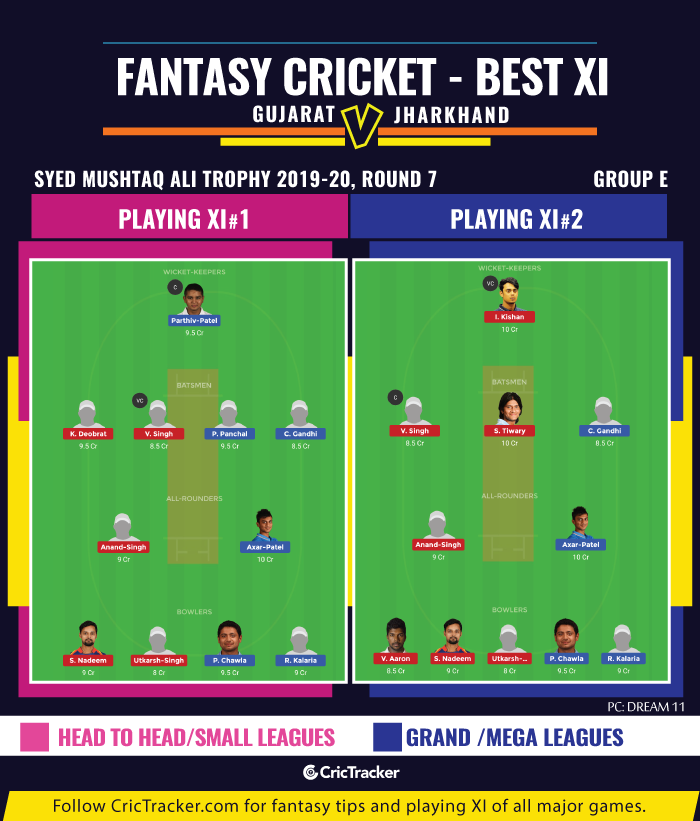 Ishan Kishan is one of the most exciting T20 talents across the country. He hasn’t got off to great innings till now in the tournament. But, on his day, he can be a threat to any bowling line-up. So, leaving Ishan outside your Grand League team can be a wrong step.

Jharkhand is expected to win this encounter.