Making the in-form Deepak Chahar the captain is also a good punt.

Round 7 pits home side, Kerala against Rajasthan in what is a must-win game for either side in Thiruvananthapuram. Both teams have won three out of four games owing to their bowling units. While Rajasthan’s capped trio of Rahul Chahar, Khaleel Ahmed and Deepak Chahar has led the way for them, Kerala’s all-round performances have seen them beat table-toppers, Vidarbha on Thursday.

Although both teams are in fine form, home conditions and greater balance in the squad gives Kerala the upper hand. With two of the best bowling attacks in the Syed Mushtaq Ali Trophy 2019 squaring off, a potential thriller is on the cards as both sides look to qualify for the next phase.

A bright and sunny day is expected with there being no chance of any rain interruption. A few clouds should make an appearance with the temperature hovering around 30 degrees Celsius during the match.

It’s been a mixed bag at this particular venue with both high-scoring and low-scoring thrillers being witnessed. The morning games have seen better batting tracks which should be the case for this game. The spin should play a huge factor as the game progresses with teams preferring to bowl first and make use of the swing upfront.

Average score:  137 (In eight matches at the venue)

Deepak Chahar is one of the in-form bowlers in the world right now. With seven wickets in just a few games, Chahar’s incisive swing bowling is a lethal weapon in Rajasthan’s armoury. Although Sanju Samson didn’t get a chance to showcase his talents for India, he still remains Kerala’s best bet with the bat. He is due for a big score in this season’s Syed Mushtaq Ali Trophy with only a couple of starts to show for his efforts so far.

Jalaj Saxena has been one of Kerala’s best players over the last year or so. With Saxena capable of picking a wicket or two with his spin, he is one to watch out for on Friday. These players should be picked in your Dream11 Fantasy side. 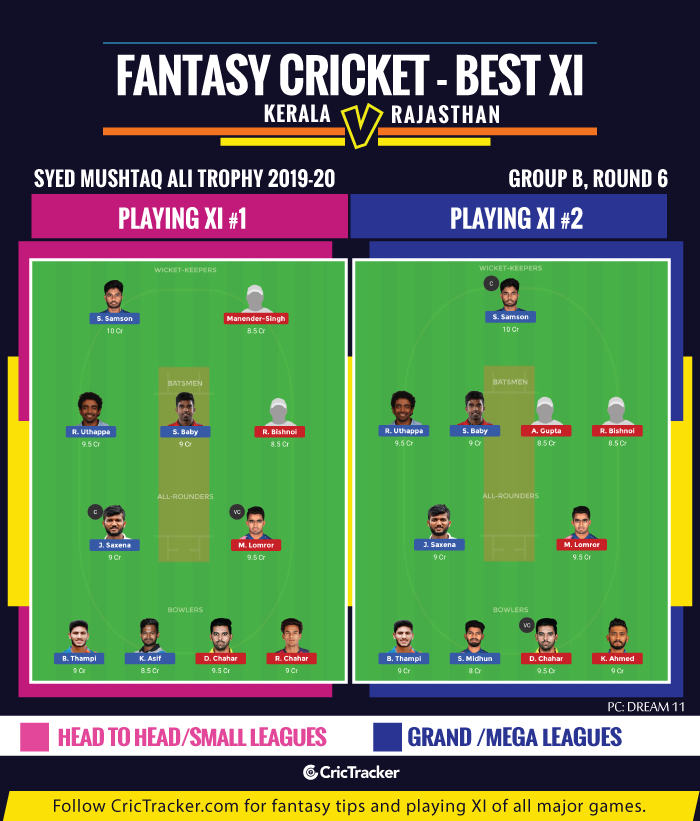 With the pitch getting slower as the game progresses, Jalaj Saxena is more than handy to have in your Dream11 Fantasy team. With the Kerala all-rounder batting in the top order as well, he is one to pick in the side.

Considering Kerala’s quality swing bowling duo of Warrier and Asif, picking Rajasthan openers in your fantasy team would be a risk.

Kerala is favourites to win this encounter.